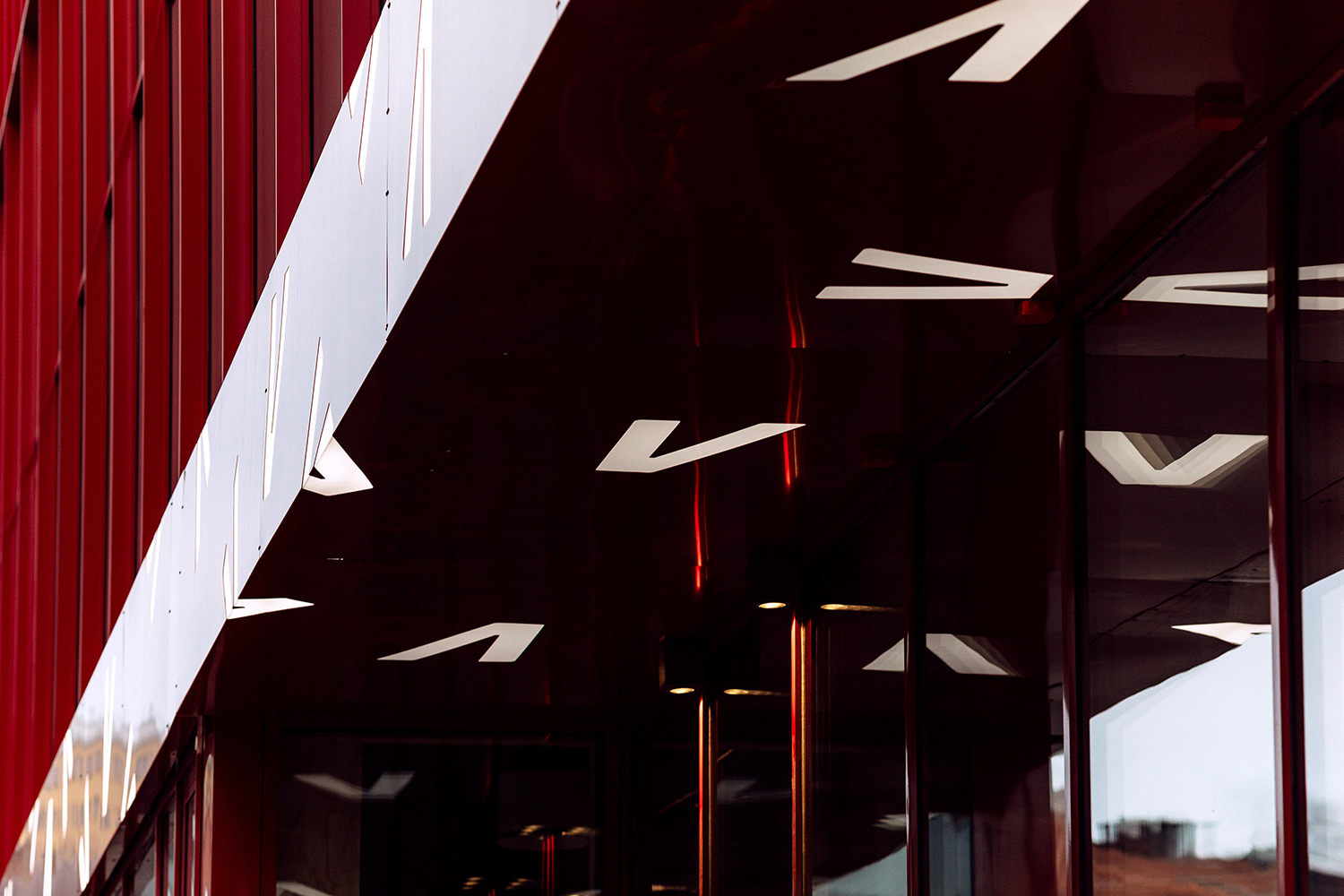 Vega Scene is space for food and culture located on the river Akerselva in the centre of Oslo. It features three film screens, a theatre, debate lounge, an organic and sustainable cafe and a wine and cocktail bar. Vega Scene sits within an area of urban culture, features a distinctive exterior of burgundy concave panelling and vertical slats, and a visual identity of colour blocking, arrows, monospaced typeface and motion designed by Norwegian studio Metric. This visual identity links posters, neon signage, wayfinding and website, and also moves across the surface of the building.

Vega Scene is described as a vibrant meeting place for art-cinema, contemporary theatre and debate. Further, a gathering point where audience and industry can get together, share, discuss and gain new knowledge of the world through art.

The themes of cultural transmission, congregation, energy and inclusivity, set within a practical, contemporary and purpose-built architectural structure is neatly brought together by Metric and expressed through Vega’s new visual identity. These themes emerge by way of a converging arrow motif of Vs that forms an eye, and the way this moves and breaks into individual arrows forming new paths, working as a distinct graphic motif and connecting visual identity directly with architecture. That these arrows do not go on to serve a practical purpose, guiding people through space, is a shame, instead, those arrows of GrilliType’s Pressura take over.

The monospaced characters and forms of Pressura and underlying grid system brings a rationality to the free-moving, expanding and contracting and dissembling motif, and shares something in common with the architecture. Where this systematic quality and adherence to the mechanical and the utilitarian could be perceived as cold, the introduction of solid colour blocking tempers with this with a warm and playful character. Iconography also serves to bridge play and communicative practicality, literally in its imposition on type but in the similar weighting and monolinear qualities.

Vega is located by the Akerselva river within an area said to be infused with urban culture and inhabited by underground artists, independent bars/nightclubs and live music venues. The visual language of this area is marked by the DIY aesthetic of wheat-pasted poster walls and the neon signage that connects different cultural venues, cinema, music and bars. This forms a component of Vega Scene’s visual identity system, and a particular highlight. Signage and wayfinding, in its shape and almost material quality it displays in the way it conforms to the surfaces of the venue, shares something of the quality of fly posters, while space also features neon versions of the logo. This reference to locality is subtle and could, perhaps, have been pushed a little further. 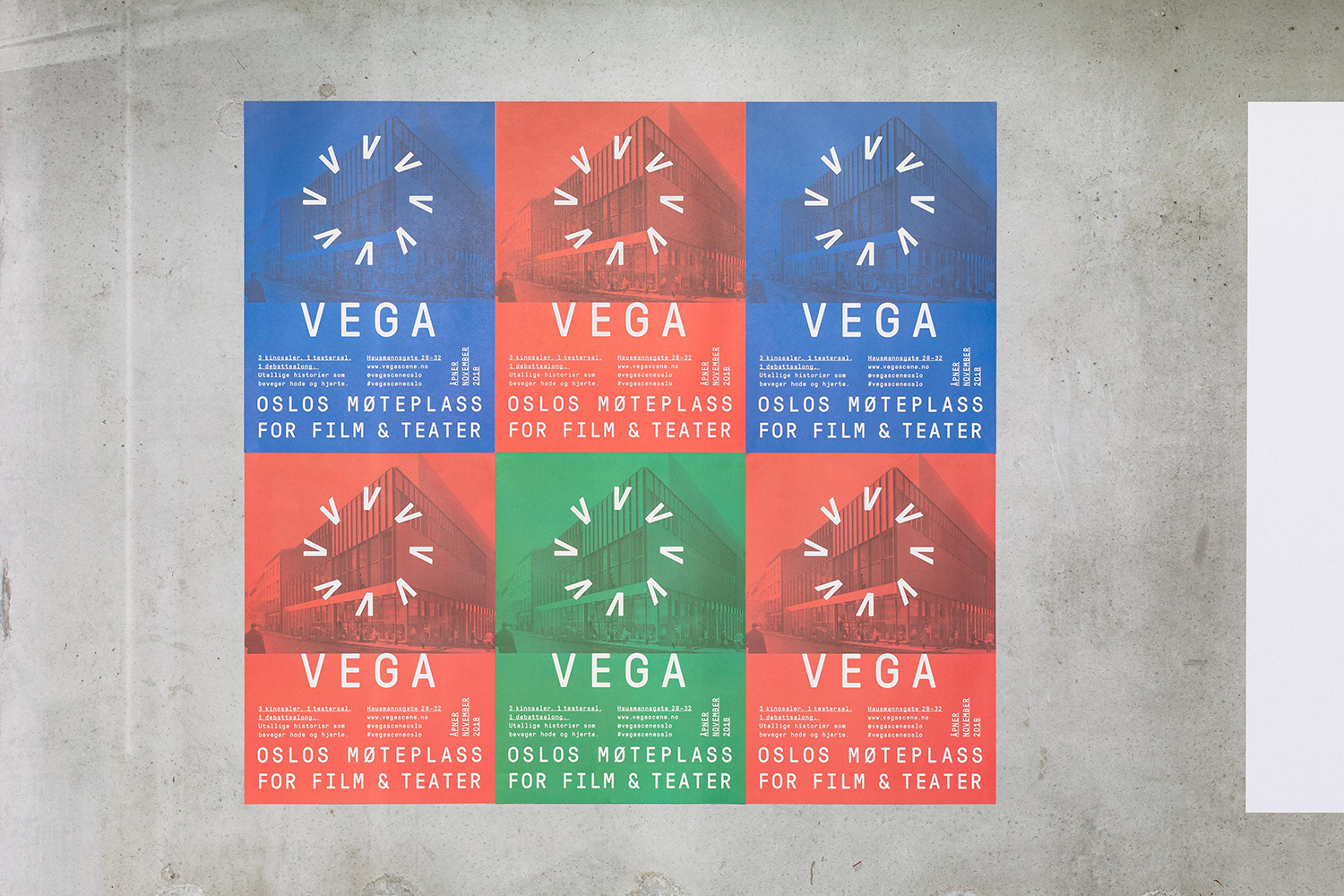 The result is a smart mix of visual character, usefulness and spirit of gathering and sharing in cultural activities and insight. It delivers a dynamic character even when static, and neatly moves across the surfaces of interior and exterior architecture. The bringing of the outside cultural landscape inside is subtle but neat, sitting well with a rational system and architectural space of concrete, whilst introducing an invitational warmth through colour. More from Metric on BP&O. 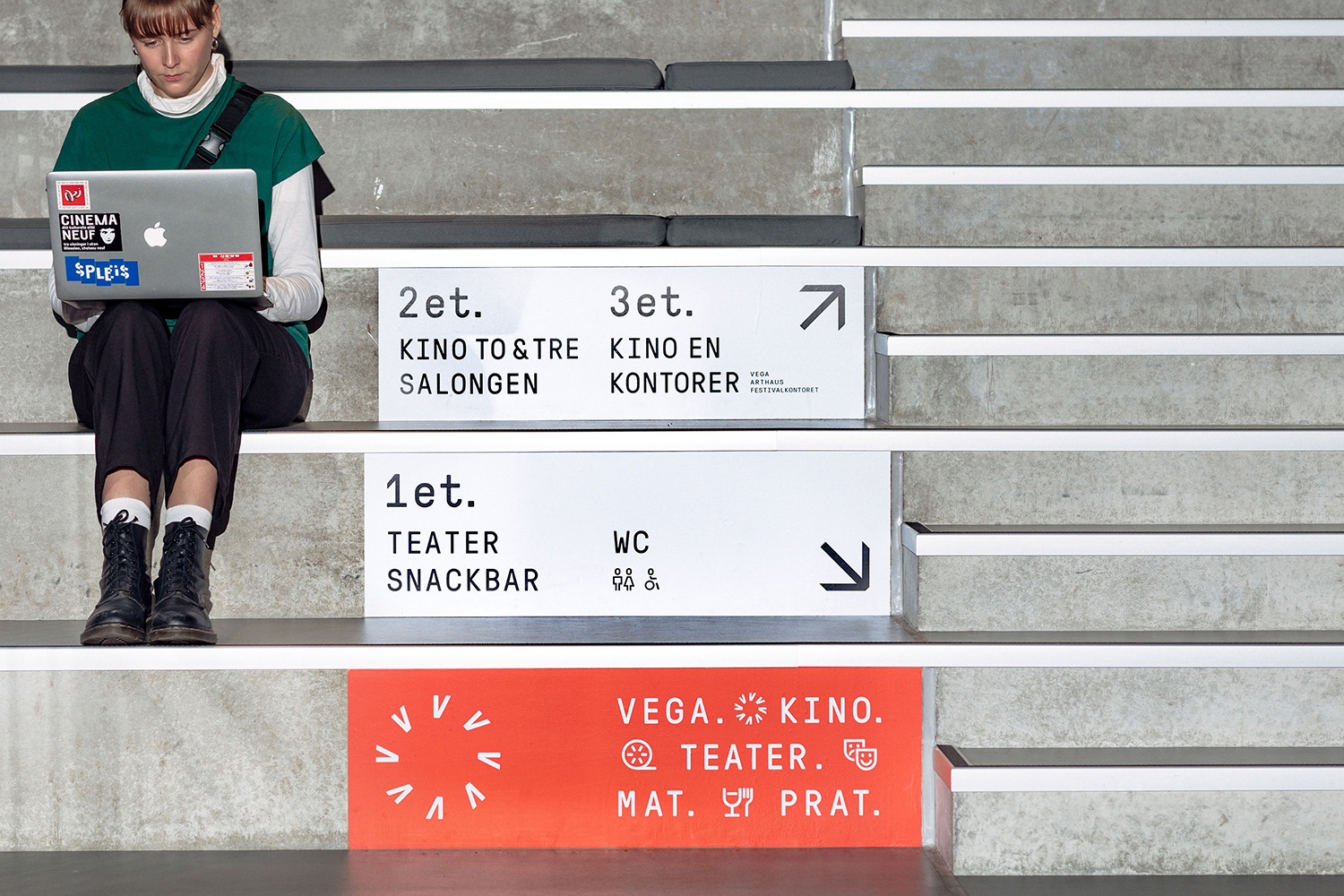