Origen México is a encyclopaedic collection of cultural reference points from Mexico, and an expression of love for its land and identity, edited by Ámbar Editores and Paola Gonzalez Vargas. Written in Spanish it covers things such as, Barro negro pottery; the black clay pottery of Oaxaca, Barrancas del Cobre; the six canyons in the Sierra Madre Occidental and individuals such as pioneering filmmaker Alfonso Cuarón. In its breadth the book has a temporality; a relationship with time. One idea, place, person, piece of pottery or art directly or indirectly informs the another. Layers are built. The present is founded on, but would ultimately find it hard to recognise, all of the past, except that which immediately proceeded it. This is expressed through the materiality of the book, designed by Canadian studio Blok, using a light copy paper and show-through, the relationships and continuity formed with a consistent image treatment and the codifying visual language of consistent type, layout and an encyclopaedic format.

The cultural identity of the present is informed by the past. We can recognise that which immediately came before; the things that happened yesterday that influence our actions and interests today. But yesterday was informed by the day before and the day before, far back and forgotten. Origen México is not just a collection of narratives, expression of the inherent beauty of the country or object of gratitude to those individuals that helped move others further on, but is meditation on the relationship between things, the foundations and layers that build to form a cultural identity. These are not often directly related. Thus, the materiality of Origen México, creating relationships through pages, not just between pages, using a light copy paper, becomes a compelling expression of this entanglement of objects, ideas and places. The book itself becomes an object of identity, a method of cultural transmission

Other techniques such as a single monochromatic image treatment and the approach to type (although oddly Swiss) and layout, as well as the collectivised nature of the bound book, do a similar things; establishing a continuity between what might appear like disparate things, separated by differing periods of time or geographies. The photography below, placed on top of the pages of type that proceeded it, is a great example and visual expression of how and individual is informed by many things. That the individual only goes on to further him or herself, and others, through the actions and ideas that proceeded them.

Blok get equally philosophical. “From the materiality of carbon paper—the nearly discarded—to the impossibility of a typeface that has yet to be launched, ORIGEN MÉXICO reaches across time and space to deliver narratives that are multiple, rich, and authentic. This book honours the inherent beauty of the country and gives immense gratitude to those who have moved us to see further and deeper. All of the profits from the book support accessible education in Mexico.” – Blok.

Other highlights include the literal layers of the dust cover, and the different colours that build to create layers along the edge of the book. And the use of portrait and landscape modes, emphasising the materiality of the book, and gives a tangibility to the things of the past which may longer exist today. More work by Blok on BP&O. 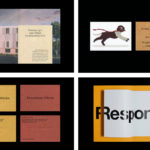 Lookbooks by Studio Lowrie
Next
Get once weekly updates