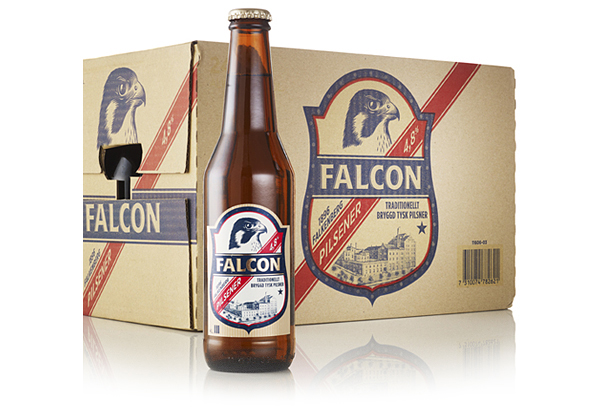 Falcon is a Swedish pilsner owned and distributed by Danish brewing company Carlsberg with a family heritage dating back to 1896. As part of an increased marketing spend and a new campaign, directed by DDB, Stockholm based design agency Nine was tasked with repackaging the Falcon brand to reinforce its traditional and premium proposition with a German pilsner inspired aesthetic.

“NINE was briefed to incorporate the design associations that classic German pils bring, with clear reference to the tradition and heritage of the Falkenberg brewery. The solution is a classic beer design, using attributes from old Falcon promotion materials,”

I am not entirely sure infusing German sensibilities into a traditional Swedish larger is truly representative but the result is a still pleasant with a classic visual style being applied with a retrospective appreciation. What is quite remarkable is how well Nine has managed to recreate such a specific style to the point where it is hard to discern whether this is a ‘new’ design or pulled from the brewery’s archive (which in part it was). The classic crest device has been really well utilised and neatly holds together the single tone etched illustration of the brewery and the iconic falcon which is now more detailed with suitably more traditional sensibility. The box is refreshingly simple with an uncoated, corrugated and screen printed design that conveys a bold and wholesome quality.