Migrant Journal No.5 by Offshore Studio

Migrant Journal is a six-part exploration of migration in all its forms. It covers, as you might expect, the current and pressing political and socio-cultural implications of the mass migration of people, yet also delves deeper into the more abstract movement of ideas, power and information around the globe. Migrant Journal, in its breadth but a continuity of theme, intends to reclaim the word migration, to break free from prejudice and cliché.

This is a hands-on review of Migrant Journal No.5 its themes and how these manifest themselves visually and materially. This issue, Micro Odysseys, explores microscopic entanglements, invisible movements, tiny particles, imperceptible matter and antimatter. For thoughts on Migrant Journal as a total project, check out BP&O’s review here.

Migrant Journal began as a Kickstarter project and is edited by Justinien Tribillon, Michaela Büsse and Dámaso Randulfe, co-edited and designed by Isabel Seiffert and Christoph Miler of Offshore Studio.

Migrant Journal employs something of an “enhanced materiality” (an unusual and extensive material expense) to see the ideas related to migration migrate themselves through physical and digital space by way of a distinctive material identity and striking graphic identity, respectively. Issue 5 continues to do this by way of the surface texture of a sandgrain emboss, a sand-like metallic ink and a vivid fluorescent red. These choices demand consideration and lend themselves well to online sharing. Further, and perhaps more interestingly, these serve a functional purpose, linking disparate imagery of illustration and photography, the organic and electronic from a variety of contributors. Where in previous issues ink imposed itself on much of the imagery, here there is more of a lightness of touch, particularly across the environmental imagery, or more so across the man-made, a smart delineation.

The cover of no.5 breaks from the thresholds created by the lines or the implication of flow across previous issues, employing irregular dots. This abstraction creates both the desire to see relationships in size and shape, yet dissonance in space and irregularity. The cover could easily be viewed as microbial or celestial in its reference.

The highlight of Micro Odysseys is the dialogue between the micro, macro and occasionally the meta, that the unifying use of colour blurs the threshold between things such as ocean currents, continental geology and the microbial, or landmass and the contents of a petri dish. The imagery seeks to explore alternative ways of touching upon critical yet often unseen entanglements, rather than simply illustrating or augmenting text, in the same way as infographics. The article on 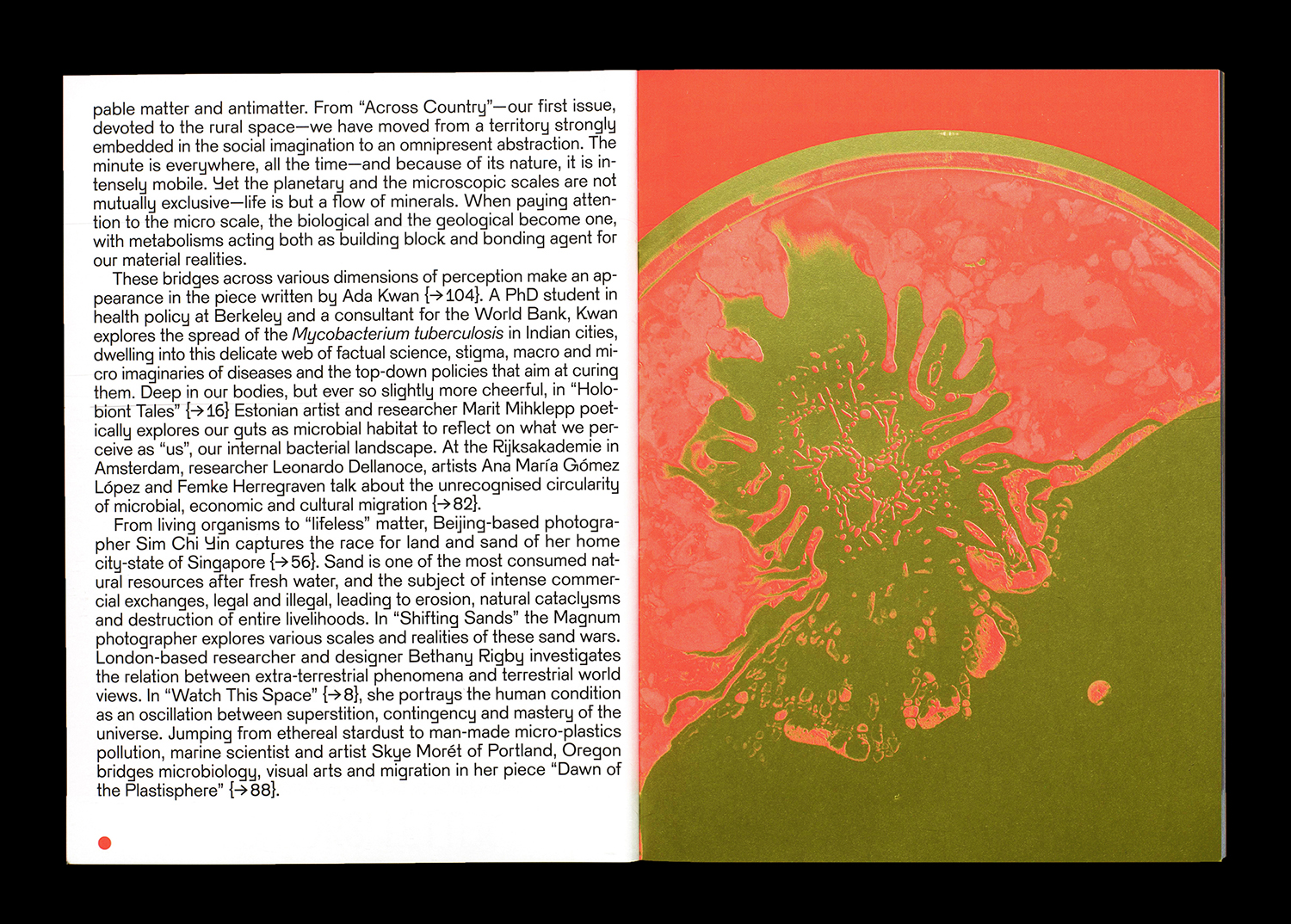 Typesetting, the interplay between the volume of text and space, and the boundaries created within the angles of custom typeface, form a continuity alongside material play across the Migrant Journal Project. This anchors a range of illustrations that introduce different visual tones, some of which are significantly different from previous issues of the journal.

The illustrations of The Missing Mineral has a humour to them. Watch This Space employs the sequential visual narrative framework and motion of a comic book. And Thorvaldsen’s Weeds feels metaphorical in its juxtaposition of inanimate sculpture (the benign) and animate nature (the invasive).

Migrant Journal Grotesk provides a useful continuity where type and space jostle in different ways in response to content, in the flow of ideas between participants, author and readership. The themes of boundaries, thresholds and flows, both the porous and the impermeable, the bidirectional and the unidirectional appear to manifest themselves in different ways across the five issues so far.

Temporality and scale are recurring themes across many of the articles. The sequencing of imagery (above), the use of aerial photography, and angles play with this to great effect. The LHC images–it is hard not to see a giant electronic eye, one that peers into the sub-atomic world–and tiny diggers working across large fields of sand, are particular highlights.

A sense of scales also manifests itself well in the formatting of text. Individual lettershapes, the words and sentences create strata, and in the use of paragraph arrangement and space, in the delineation between contributors, develop a page of interrelated text-mass and collective insight. The initial reading may be one of the current, of the zeitgeist, but much of this is rooted in the themes of the issue, rather than just a cursory visual expression. 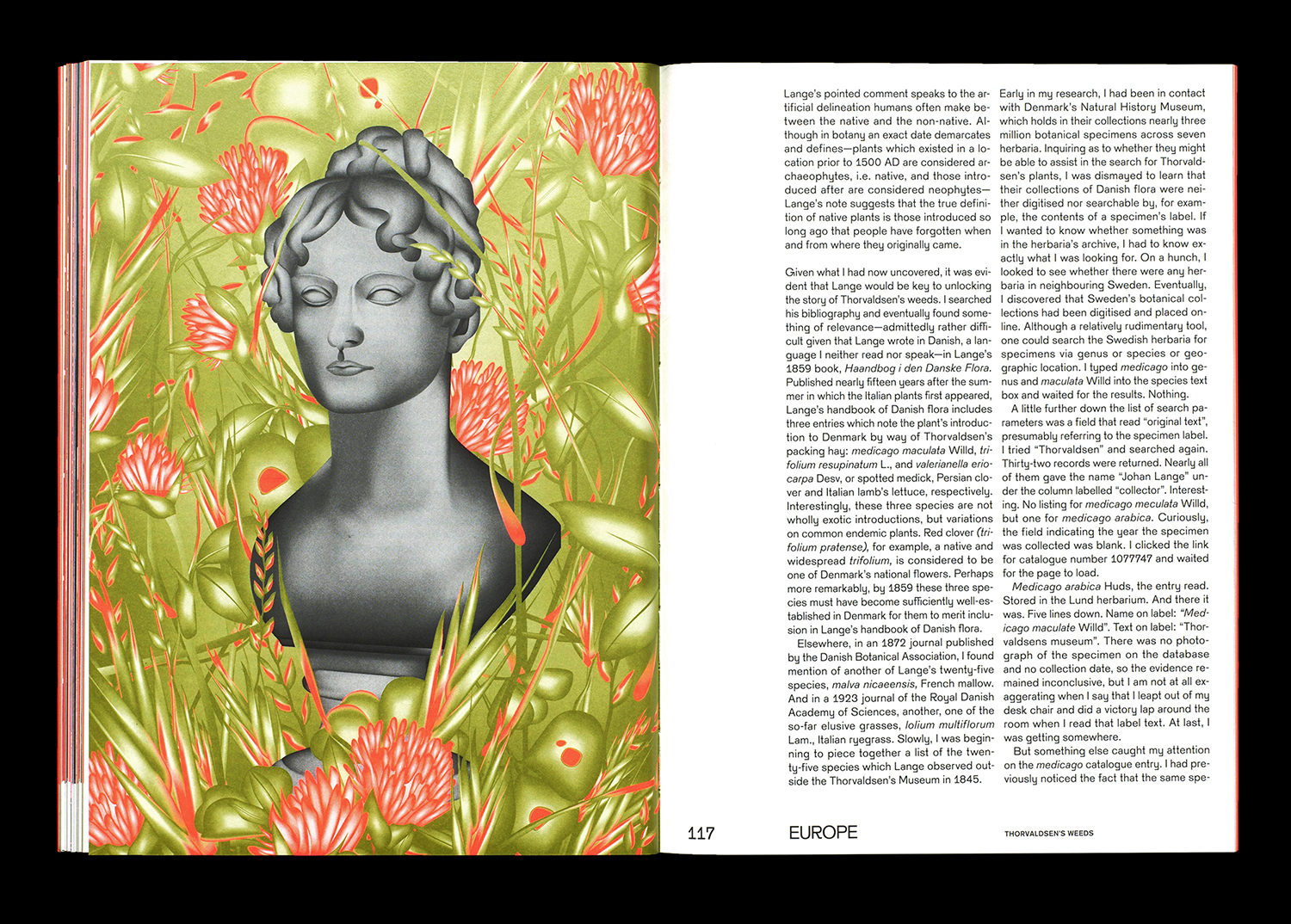 Studio Showcase: Commission
Next
Get once weekly updates