The first issue of LogoArchive was conceived, designed and sent to the printers within a day. It was inspired by a panel discussion that took place the day before at Somerset House as part of the exhibition Print! Tearing It Up. Following a successful launches of the first, second, third and Extra Issue, LogoArchive returns with its fourth release. This is dedicated to the symbols of architecture and features a cover symbol by Tomoko Miho for Omniplan.

LogoArchive as an Instagram project was founded on an enthusiasm for a beautifully crafted symbol and smart use of form language. However, in print it was never conceived as a booklet with just a singular intention; the simple documentation of symbols, rather, a way to tell a story and migrate thoughts and ideas outside of traditional distribution channels and publishing expectations.

LogoArchive explores the potential of the zine to iterate visibly each issue over time. Alongside the presentation of mid-century symbols within the consistent form of a black booklet, each new issue features a different insert. These are surfaces for enquiry and self-criticism, typographical, spatial and material play and partial thoughts and proposals. This began with Issue 2’s text on the eye as a crucial part of human sociological development and its evolving associations as a graphic symbol and continued in Issue 3 in the form of half pages and interwoven narratives and texts. The insert was used to great effect by Blair Thomson to introduce full-colour imagery within his Canada Modern Extra Issue.

LogoArchive Issue 4 explores the liminal space created by architecture and graphic design, firstly, in the documentation of symbols created for architects, architect magazines, events and unions, and secondly, by employing the architectural notion of nesting; placing one narrative inside another. This manifests itself in the form of a “zine within a zine” which also carries with it the spirit (and convivial subtext) of the Yo Dawg meme.

Freigeist was a popular concept within 18th Century German literature and journalism. It was used to describe those who believed that thinking should not be constrained by traditional ideas, certain fundamental and non-contestable values as well as firmly established channels of distribution. The concept of the “free spirit” and of free thinking is also a reoccurring theme within Nietzsche’s philosophy. Although at first glance the Freigeist concept may appear lacking in complexity, Nietzsche found a philosophical significance within it. To him, it was more than an invocation towards individuality and the subversion of expectation but the search for and liberation of a spirit. The Freigeist zine was produced in search of that spirit.

Freigeist is an experiment. It is an experiment folded inside another experiment (the LogoArchive Zine). In this way it plays with the architectural (and literary) notion of nesting; placing one narrative inside another, two individual projects that, in their collation, in the way one moves the other, and in their differences creates a space for interpretation. It seeks to explore the notion of ambiguity as a way to sharpen perception and the potential of abstract ideas to provoke new thoughts and further meaning in others. Thus, interpretation supersedes authority. Freigeist does not seek to present complete proposals. The space of the page becomes a spielraum; a room to play with words and thoughts, and then explores a relationship between design expense and the perception of authority in the lo-fi zine within a zine format. 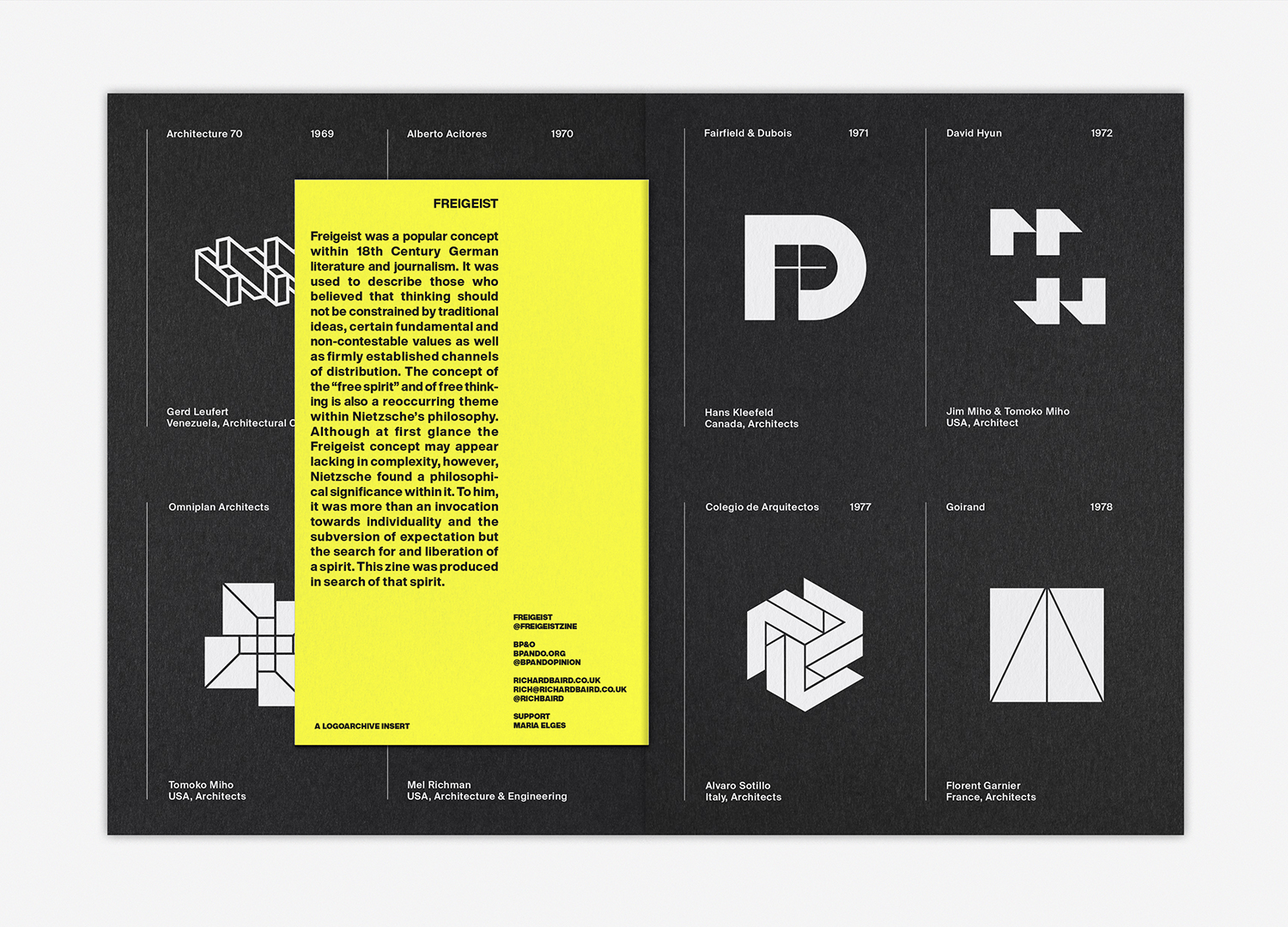 The design of Freigeist, its material colour, type and layout, is intentionally lo-fi, channelling the agency of self-published pamphlets of the past. In this format, it intends to raise a question about the tension between design expense and the “authority” of the author. Because Fregiest is light and short, occasionally abstract, made up of partial thoughts and is absent an editor, does it have less value? The author sees more value in the interpretation of reader, and the potential for the reader’s ideas to evolve outside of the project. In this way, it is an invitation and provocation, not a proposal, nor a doctrine but a jumping-off point.

The Freigiest Issue 1 insert is available in three Colorplan coloured papers, randomly distributed. Each has its own concept and relevance within the broader LogoArchive project; the theme of this issue, and my own individual curiosity and aesthetic sensitivities. These include Factory Yellow; this channels the political pamphleteering of the past, maximum impact with minimum means. Pale Grey; a direct reference to the architectural theme of the main booklet. And Fuchsia Pink; a flight of visual fancy and an exploration of the potential for limited editions (there are only 50 copies of this colour). 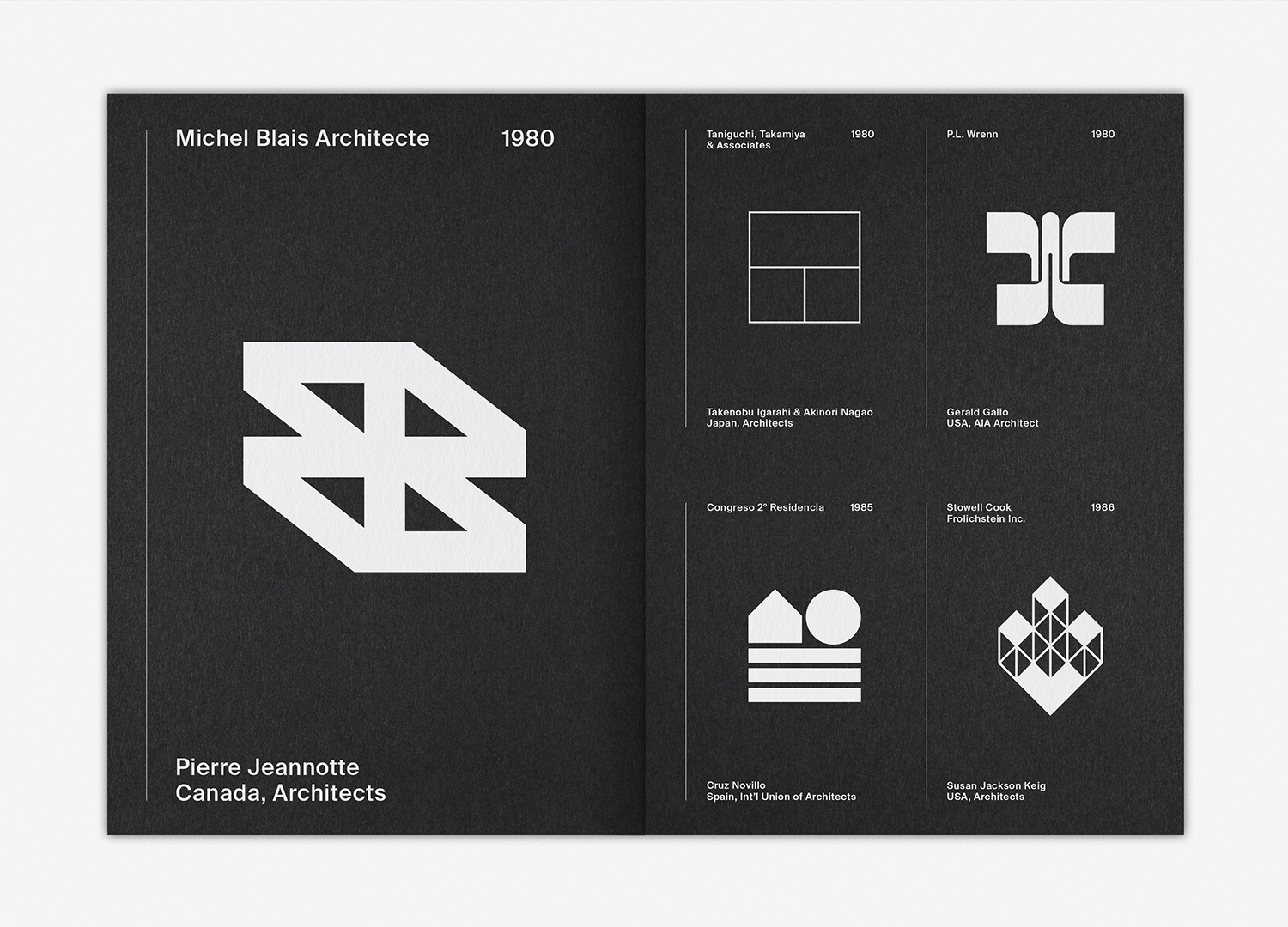 LogoArchive Issue 4 is printed by WithPrint on Colorplan Ebony 175gsm with multiple passes of white ink on an HP Indigo press. The insert is printed Colorplan Factory Yellow, Colorplan Pale Grey and Colorplan Fuchsia Pink with black ink. These are bound together with black staples. 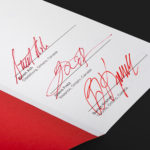 New Victory Theatre by Pentagram
Next
Get once weekly updates