Opinion by Eleanor Robertson Posted 5 May 2022

In 1984, the death of the wrestler Rodolfo Guzmán Huerta – commonly known as El Santo – sent shockwaves through Mexico. Over the course of five decades and 15,000 matches, the legendary fighter had captivated audiences, helping to fuel the growth of Lucha Libre around the world. Through his appearances in film, comic books and cartoons, he established himself as a Mexican folk hero and cultural icon.

In line with his wishes, El Santo was buried in his famous silver mask. The funeral was one of the biggest in Mexican history, attended by tens of thousands of fans. This was the Golden Age of pro-wrestling, coinciding with the dawn of cable television. Influenced by El Santo’s popularity, global media outlets (including WWF) drew inspiration from the distinctive personalities, over-the-top performances and vibrant costumes of South America’s luchadores to promote the sport as pop culture.

Brutal Burrito pays tribute to this period with a menu of dishes named after Mexican wrestlers, and an identity that could easily be pinched from an 8-bit arcade. It’s a fast food joint in a trendy part of Madrid, serving burritos, of the authentic, freshly made variety, with organic ingredients, homemade salsas and artisan tortillas. The branding is the work of Tres Tipos Gráficos, an experimental Spanish studio with a reputation for a bold and contemporary aesthetic. 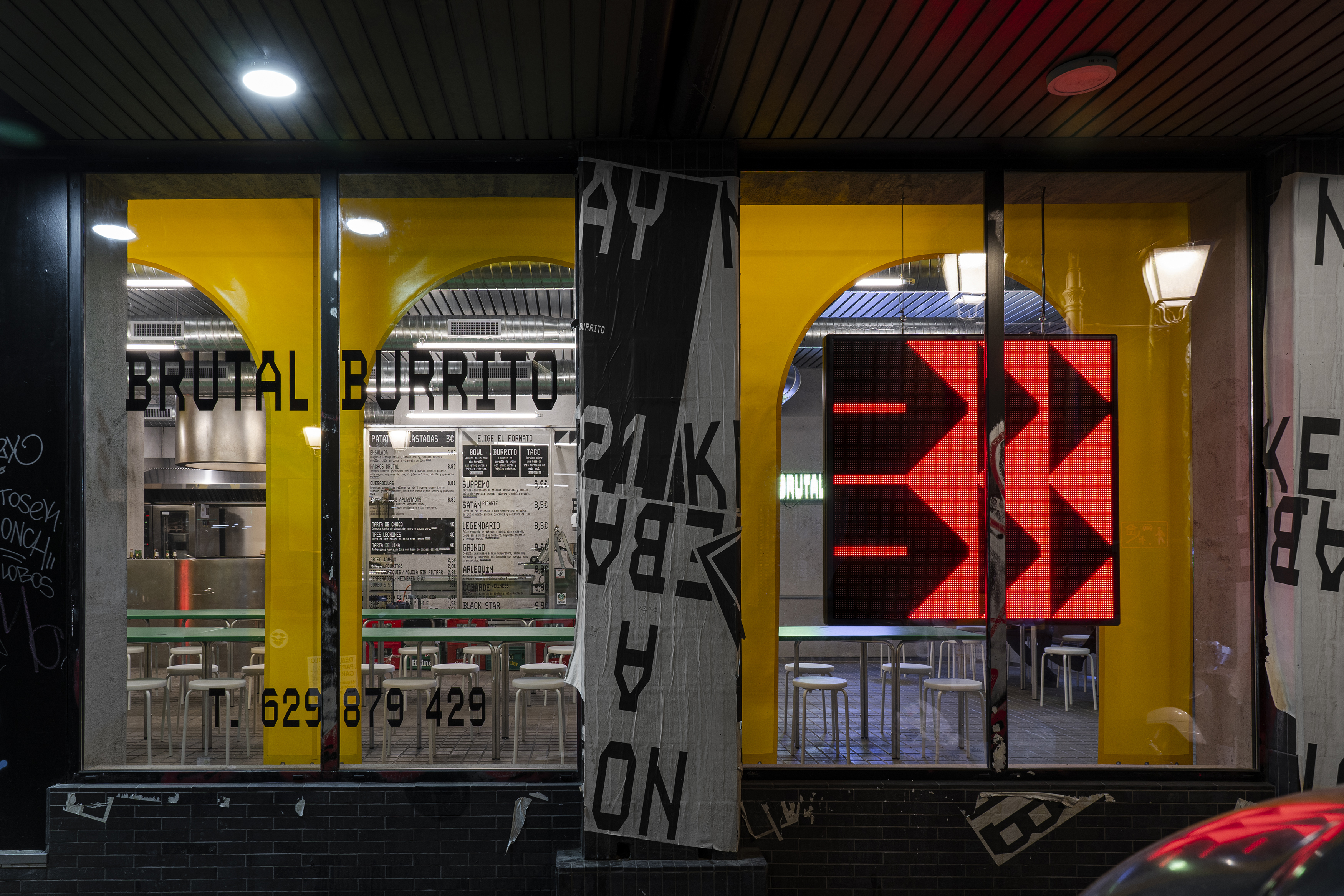 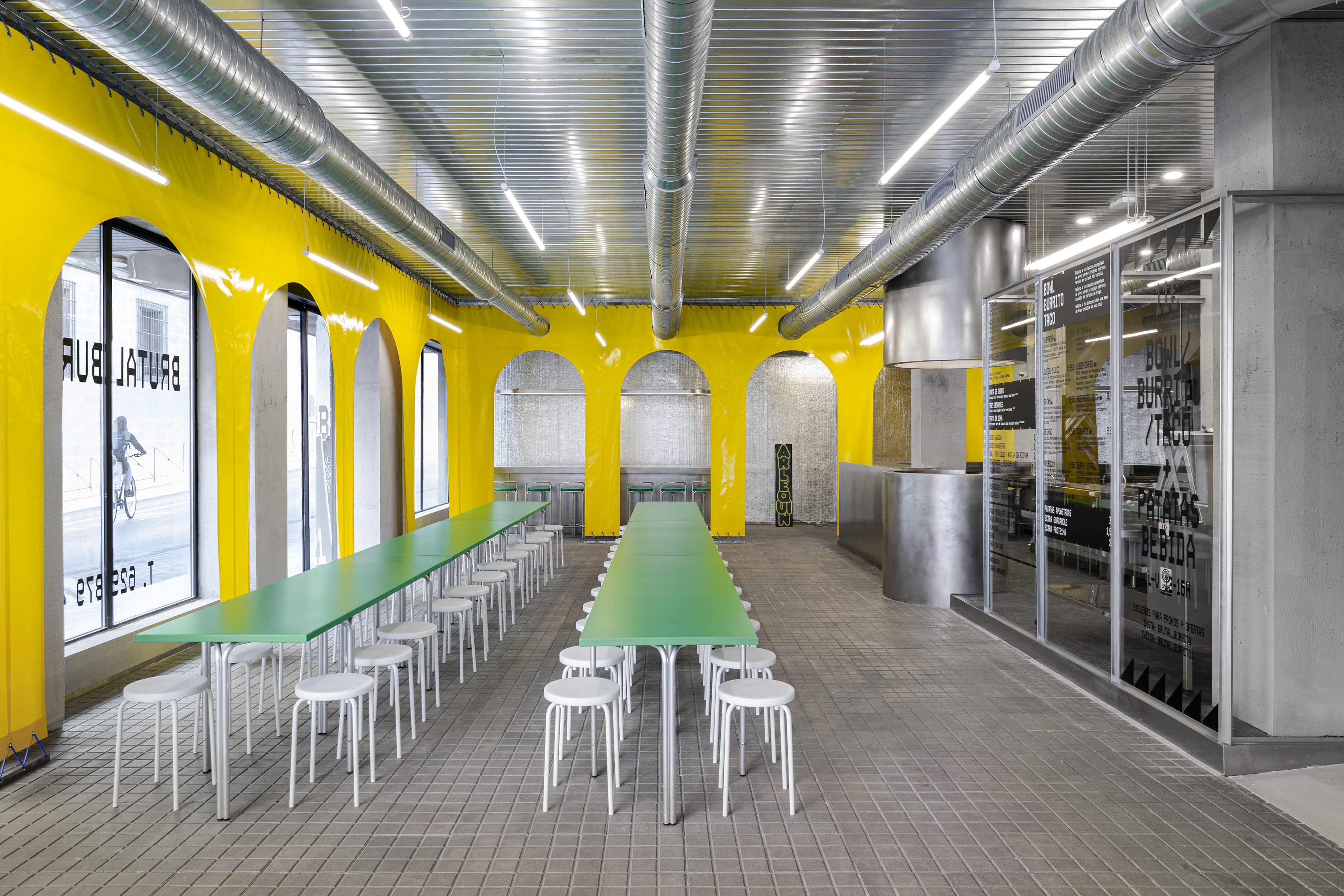 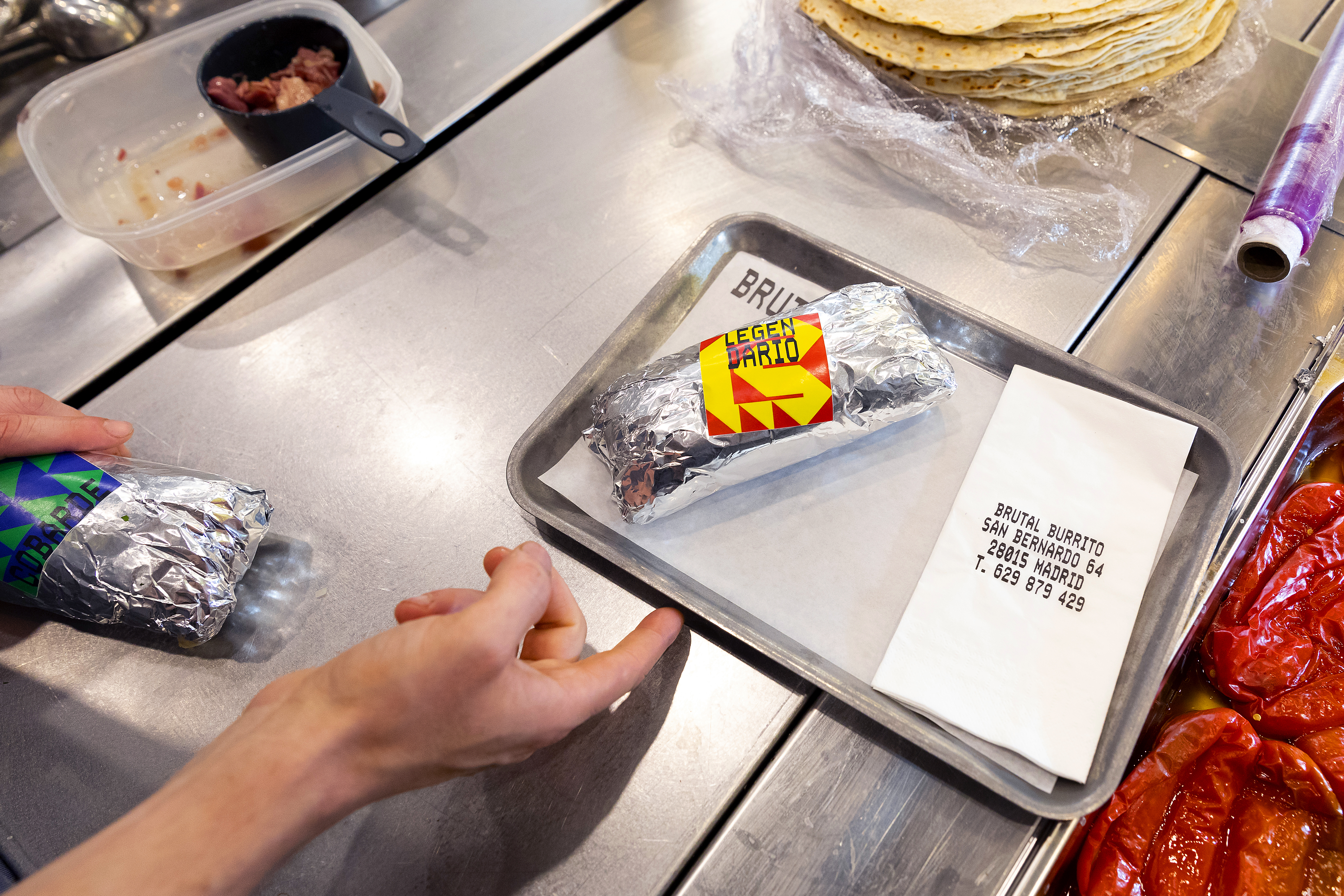 Type takes centre stage as a visual device, with primary applications in Lineto’s modular Thermo Zero. It’s fresh from a thermal printer, with a lo-fi bluntness that delights with attractive-ugly uniformity. The font’s strict underlying grid system makes it a perfect partner for LED screens. Inside the store, these act as ‘pieces of art’, a window onto a universe of playful messaging; outside they make an impact amid the bustle of the street. 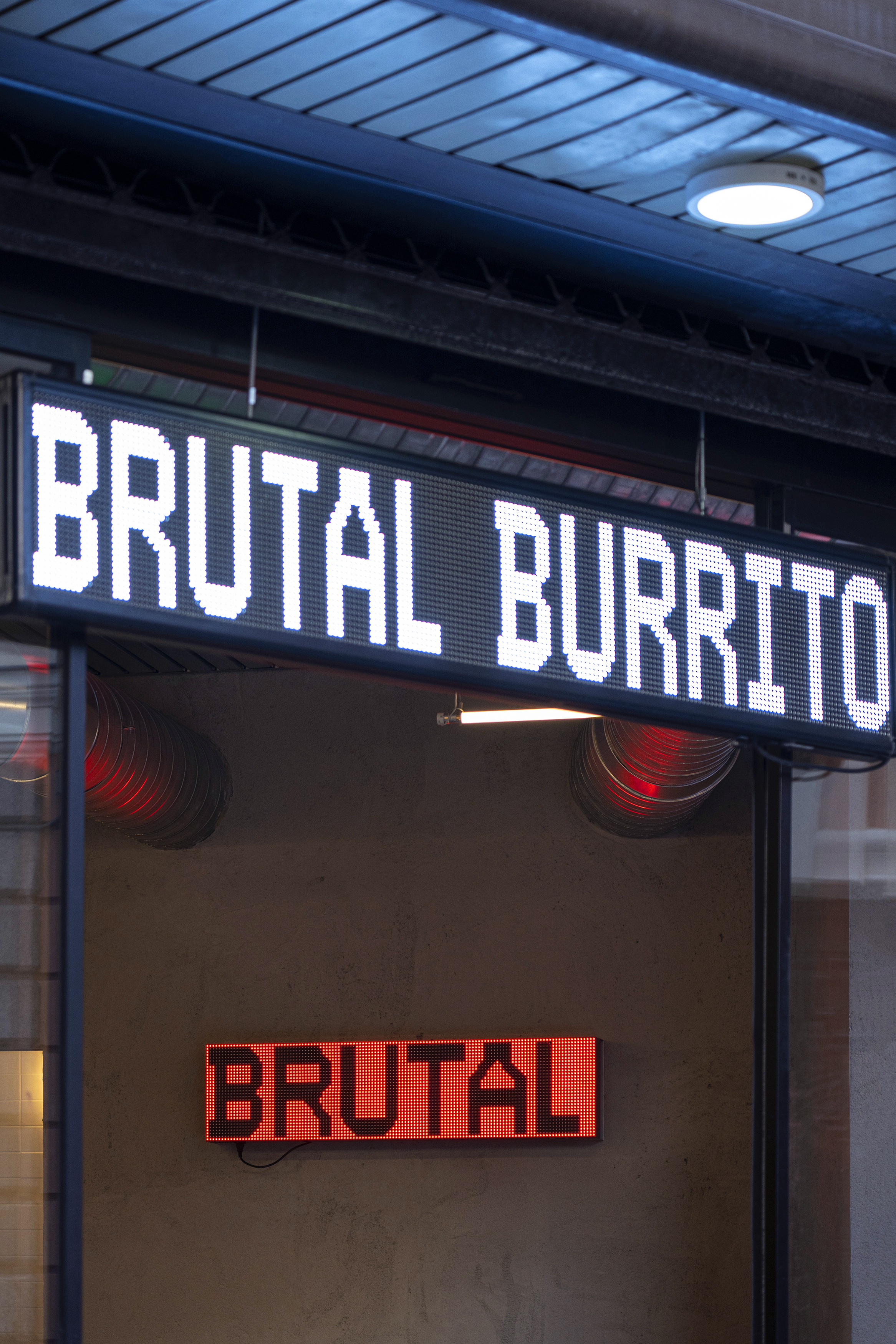 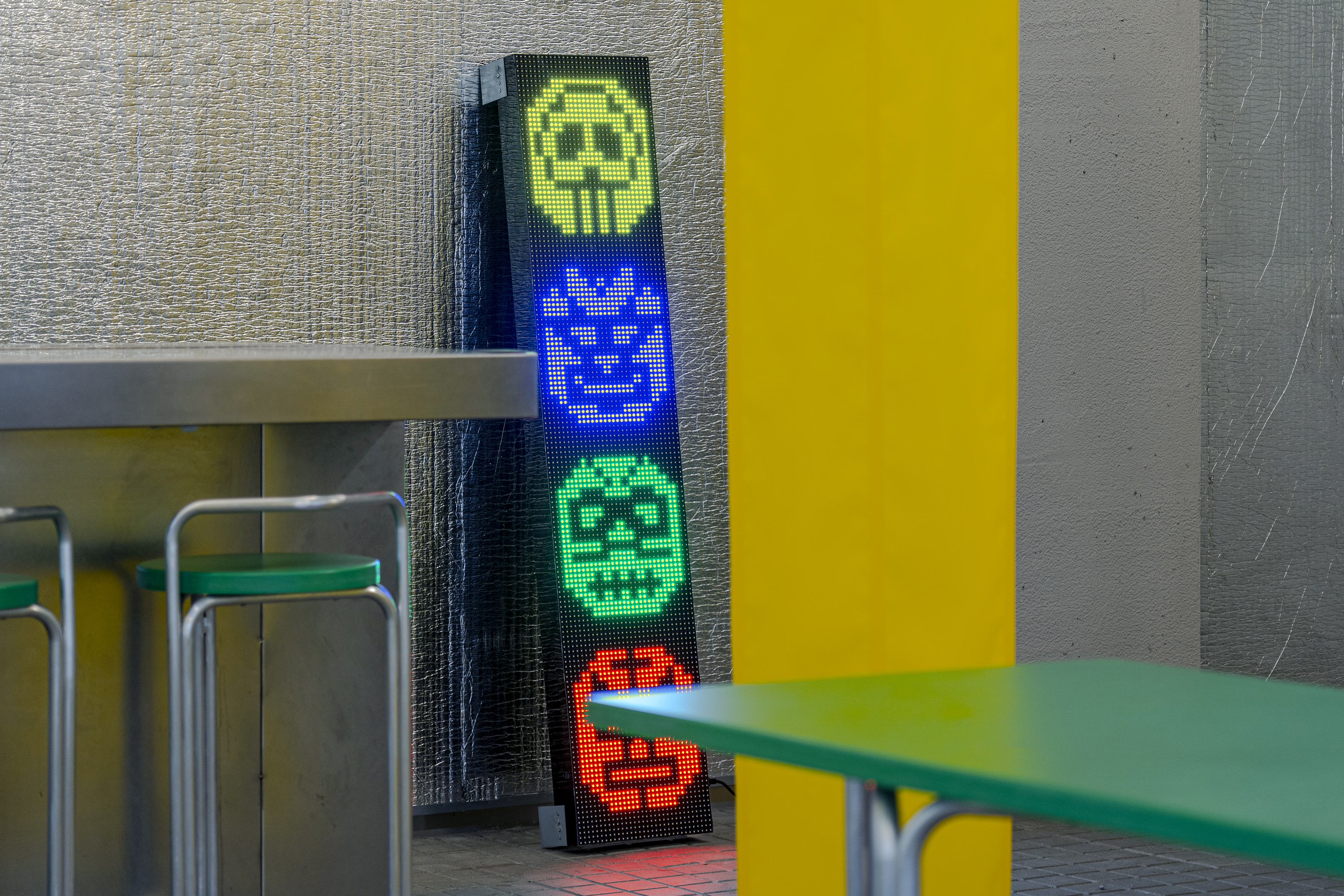 The bold geometric logos represent two ‘B’s. There is a tension between the influence of ‘the [physical] space’ – brutal, minimal, edgy – and ‘the [spiritual] place’, summoning us to the heyday of Lucha Libre with graphic forms that suggest wrestling masks. While stark and contemporary in their design, the triangular motifs also echo traditional Mexican crafts, especially textiles. This multiplicity of meaning is reflected in logo variations, which are used together (typically paired) and apart. 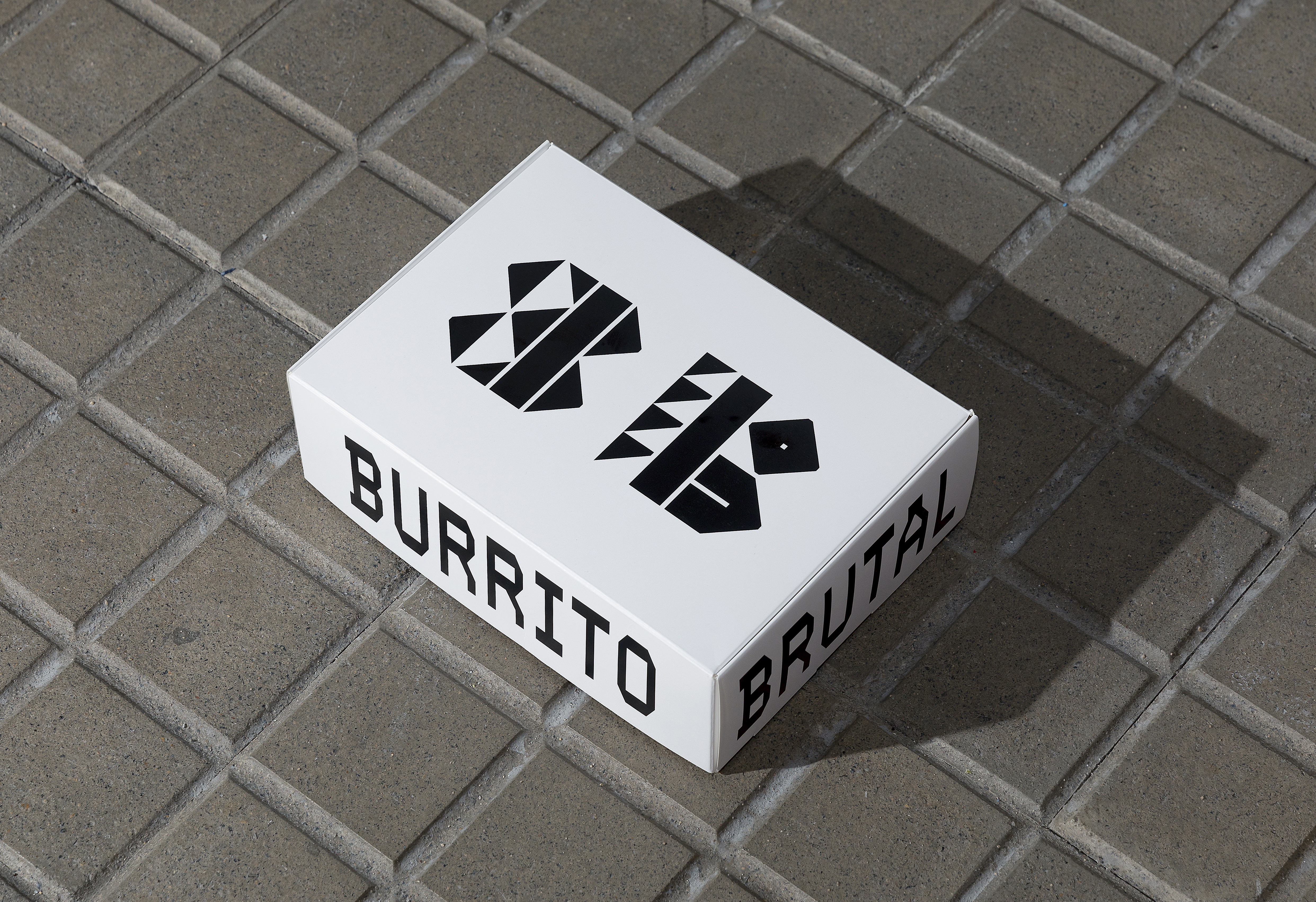 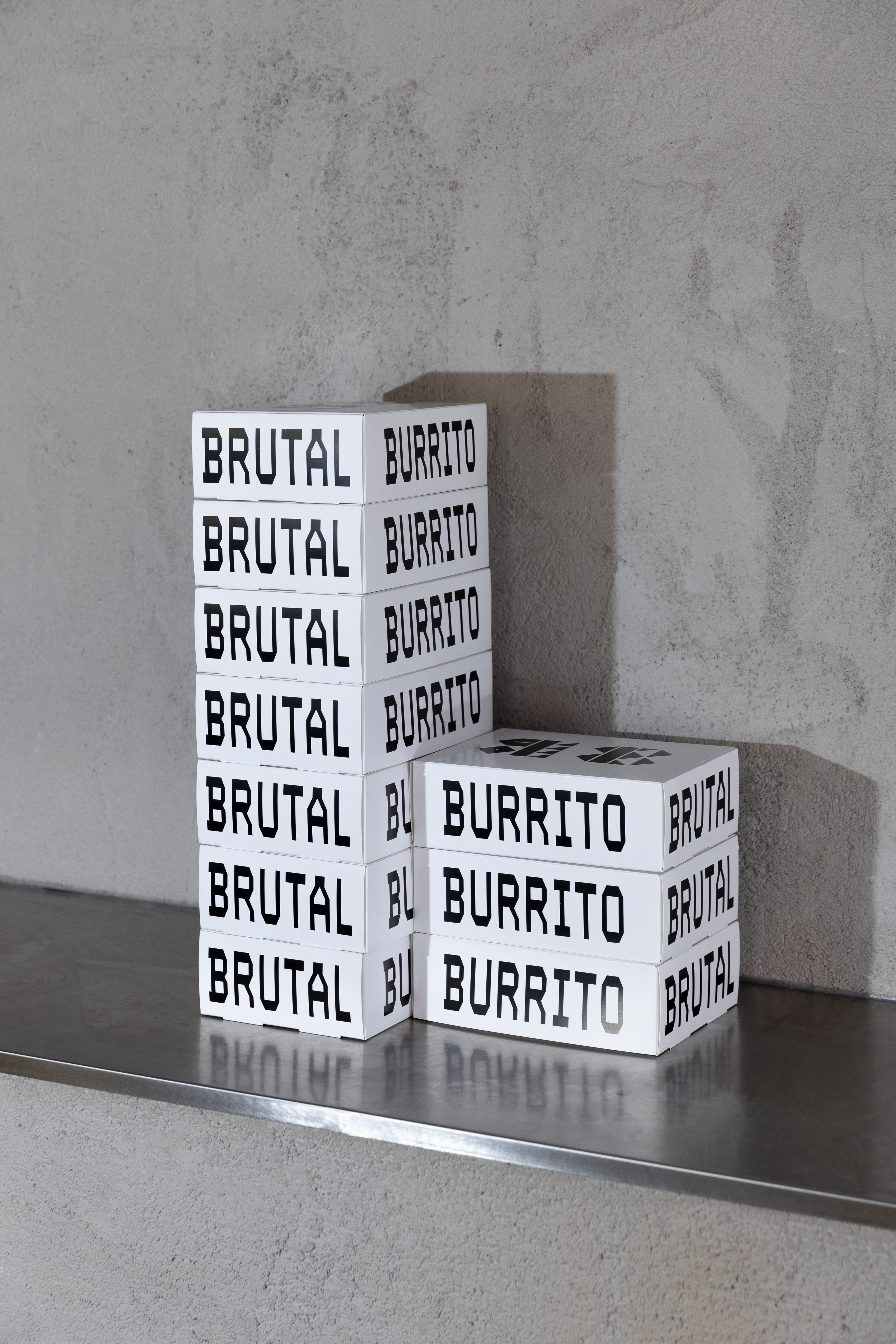 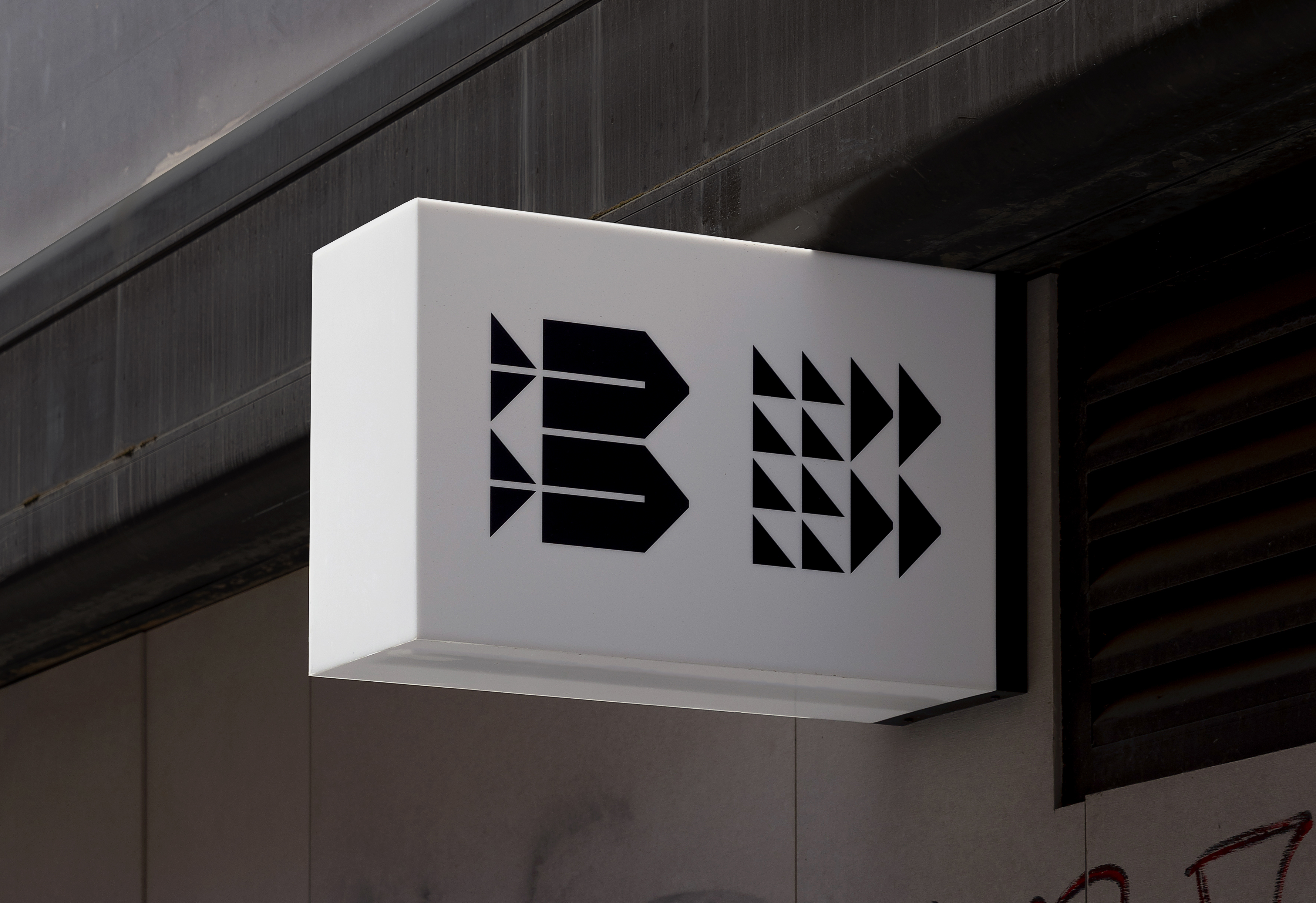 The references to Mexican street life are found across colours and materials. The palette is a digital interpretation of CMYK, reinvented in vibrant inks that border on neon. The branding is applied in stickers and fly posters, while the uniforms are utilitarian jumpsuits injected with urban brand-splashing, apparently inspired by a ‘taqueria in CDMX inside a car workshop’. Takeaway packaging is more functional, behaving as billboard in every hand and business card in every home. 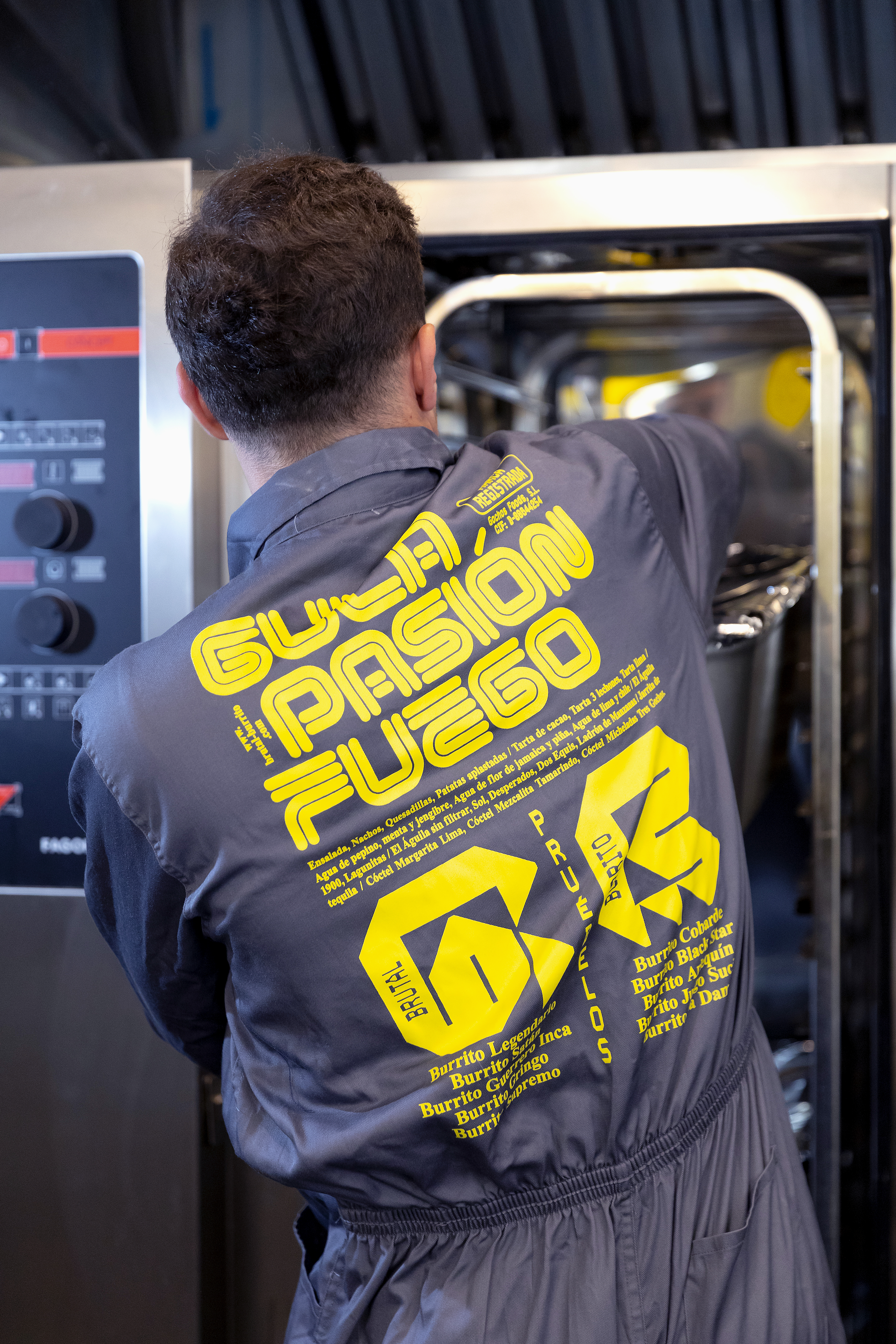 This project is very much in line with current trends, but unlike a lot of contemporary aesthetic-led work, it’s supported by a story. Tres Tipos Gráficos has been courageous in delivering an uncompromising interpretation of historical Mexican sport culture that is relevant today. It’s not clear what the rules are – graphic styles are mixed, options are endless – and yet, because the work has authenticity, it somehow all makes sense. 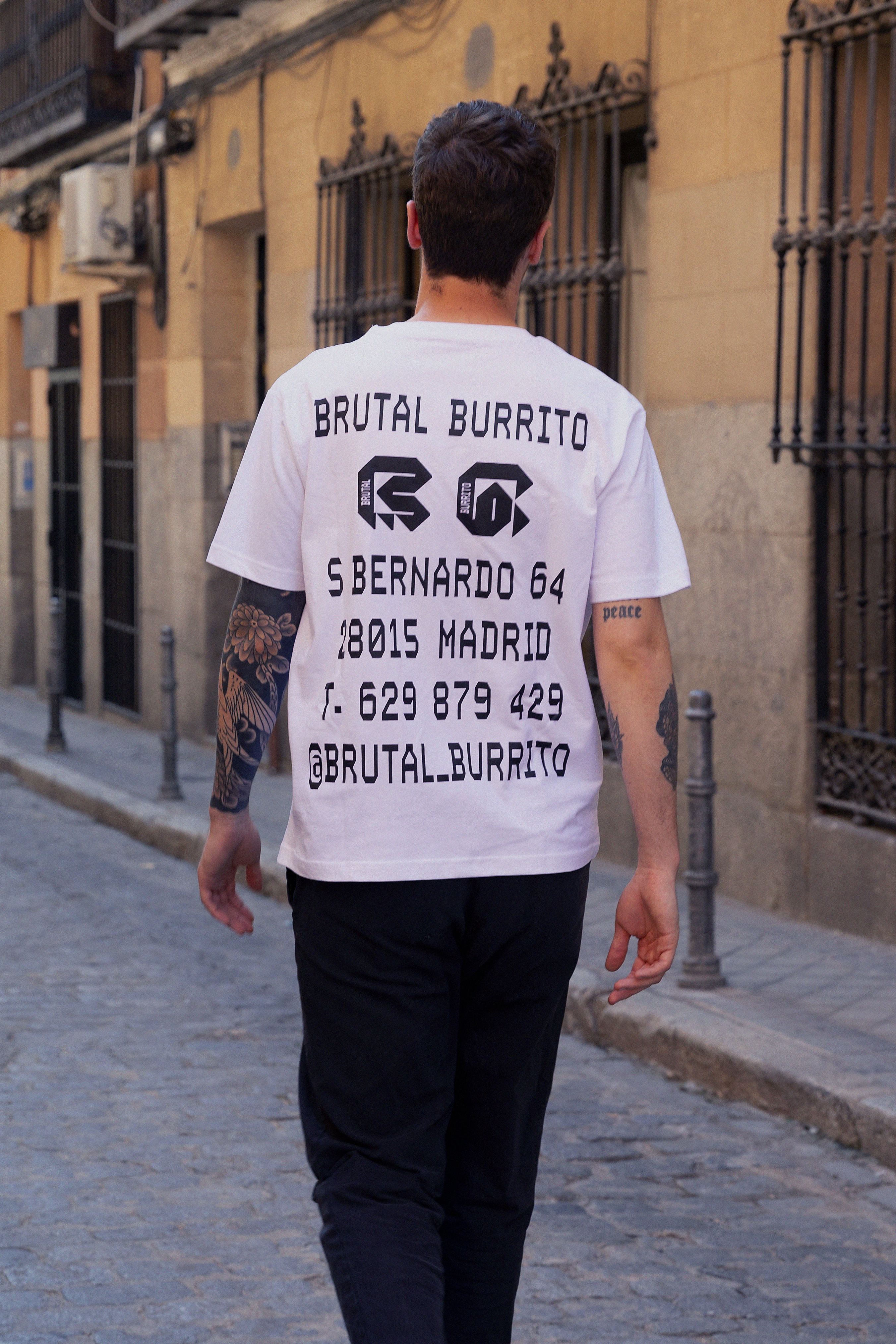