Ramen is a Japanese meat broth and wheat-noodle soup that originated in China and is now embraced internationally. While many enjoy instant versions, the best is said to be prepared over days and is the product, and some would say the art form, of a creative and experienced chef. These are the values of Tanoshii. As the first dedicated ramen bar in Dallas, Texas, Tanoshii will act as an introduction to the variety and distinctive flavours of ramen. This role is reflected within the bar’s interior design and identity treatment, developed by Denver based design studio Mast, through Western modernity and current restaurant trends, the detail of Eastern cultural references, and a little of the local area. The project went on to include menu design, interior graphics, gift certificates and coasters.

Like any good restaurant brand identity project this leads with the rich physical expression of interior space, its furnishing and decoration. White washed woods and brick work, solid wood seating, white tiles and a 30 foot mural applied using wheat paste, worn, torn and weathered, fuses the vintage and authentic illustrative detail, colour and energy of Eastern illustration with the contemporary trends of the West, and said to have a little of the urban grit of the neighbourhood.

The visual identity draws on the aesthetic, tone and duality of the interior. This is achieved through the geometric forms and European influences of a broadly spaced sans-serif logotype built from Brandon Grotesque which, in contrast, carries Eastern associations through the name, a bold graphic device of concentric circles and the cropping of the mural – as well as other similar images – into tiles across menus, gift certificates, business cards and chopstick labels.

The symbol is described by Mast as representing a bowl of noodles and, more importantly, ramen being a centric food for bringing the family together and nourishing them. It is a well-founded and well-intentioned idea, perhaps a touch abstract, yet makes for a striking aesthetic detail. Its loose line work give it a drawn quality, in contrast to the rigid and robust monolinear forms of the logotype, introducing a very subtle crafted quality and has a little of the Japanese rock garden raked sand about it.

Solid fills of electric pink and dark pine green, panels of black and areas of unprinted white space are juxtaposed alongside the detail of the mural, cut and tiled in print, bringing a modernistic order to hand drawn imagery depicting and ancient culture. This combination acts as a fair reminder of the origins of ramen, its new Western context and the intentions of the bar as an accessible and modern entry point into an unfamiliar experience, and aesthetically, looks pretty neat. 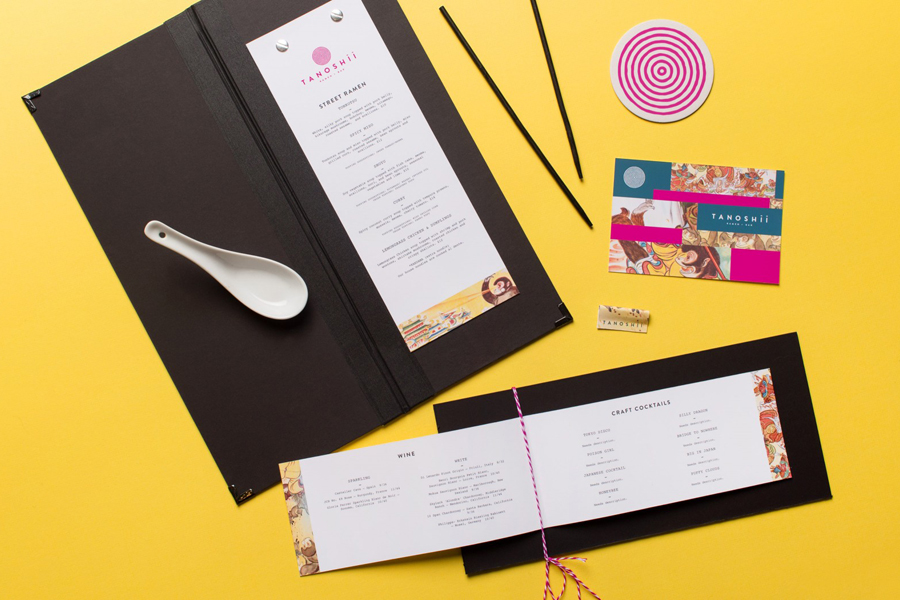 Antéoise by UMA
Next
Get once weekly updates