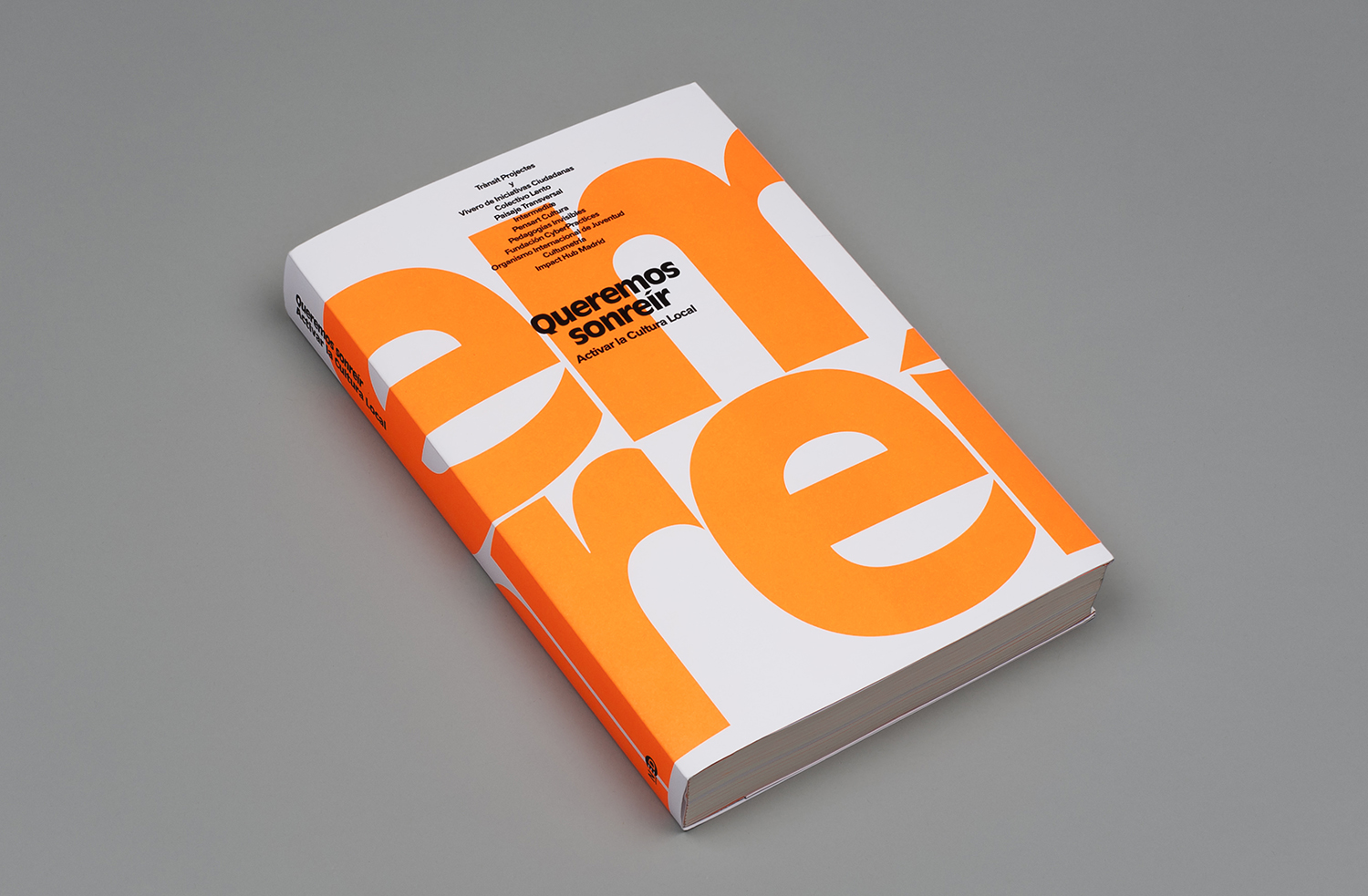 Queremos Sonreír – Activar la Cultura Local (We want to smile – Activating local culture) brings together the voices of a variety of cultural agents–from citizen collectives and activists to artists and managers of cultural programmes–who are generating actions that intend to stimulate local culture, empower citizens, develop learning processes and further critical thinking. Through these voices the book explores questions around citizen participation and cultural practices, cultural activation and alternative ways of developing and accessing cultural capital.

The book is the result of a long research process led by Trànsit Projectes, who partnered with Mucho on the design of the project’s material form. Mucho worked on concept, design, and art direction with the the themes of cultural participation and visibility as central themes.Tthese manifest themselves by way of a striking use of colour and type, and book jacket that folds out and channels the provocative visual language of protest banners with the exclamation, queremos sonreír, or we want to smile.

The need to locate and theorise about cultural practices–with the intention of encouraging cultural creation in specific territories in Spain–was revealed through a series of questionnaires and triggered a new research programme (documented in Queremos Sonreír and undertaken by Trànsit Projectes). These questionnaires linked a variety of disparate groups, organisations, and cultural managers that, together, had extensive experience in grassroots cultural work and knowledge of the revitalisation of culture in different areas using different techniques.

“On May 8, 2018, a group of residents of the Saint-Barthélémy neighborhood, in the city of Marseille, gathered in front of a McDonald’s store. The protest did not cry, as one might imagine, against the imperialist model of mass consumption or the nutritional imbalance of fast food. People were brought together by the closure of the restaurant and the orphanhood in which its dismantling leaves the neighbourhood. Because without realizing it, the inhabitants of the district had turned the few meters from the premises into the social and cultural center of the area; a meeting place in a ghetto neglected by local authorities.

If the eccentricity of the anecdote already rethinks many of the precepts that we commonly associate with an establishment of these characteristics, the history of the unusual protest is also an invitation to question the contemporary notions of cultural management. Would a group of neighbours demonstrate in favour of any of our projects?” The path to resolving these questions is guided by the voices of a dozen cultural agents, collated throughout the pages of Queremos Sonreír.

Both collectivisation and dissemination of cultural insight, and the activation of culture are central to the design of the book, from the listing of texts and participants across the cover, the different relationships formed between text blocks, and the structuring of information (sometimes pragmatic, other times with a subtext), to the visual appeal and provocative qualities of oversized cropped type and a bright warm neon ink. The protest banner as dust jacket, the cropped type a provocation to unfold it, is a nice idea, in that, while there is a top-level intellectual and research-led foundation to the book, this comes from participation and action that is often immediate and spontaneous and at a grassroots level. More work by Mucho on BP&O. 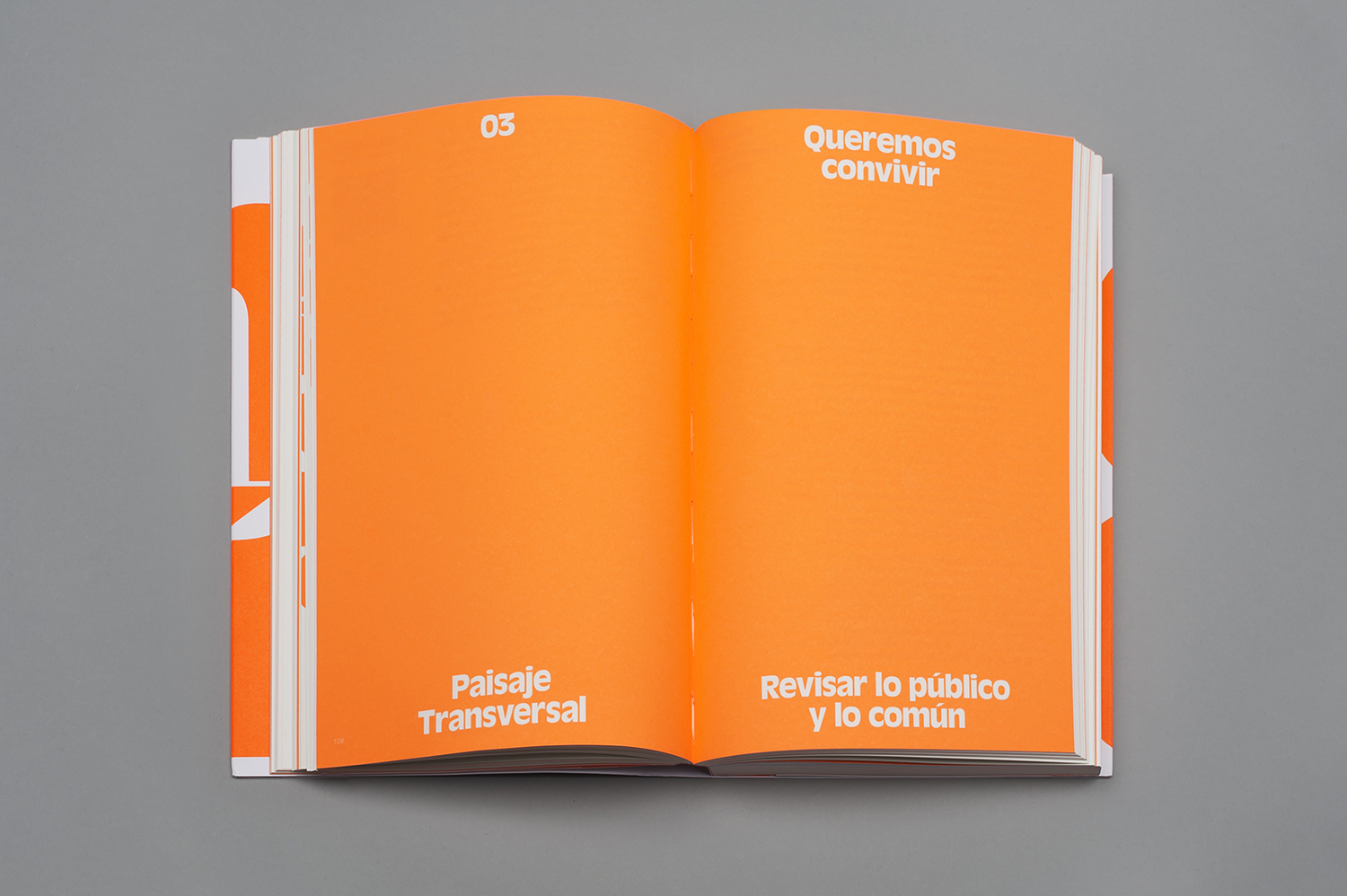 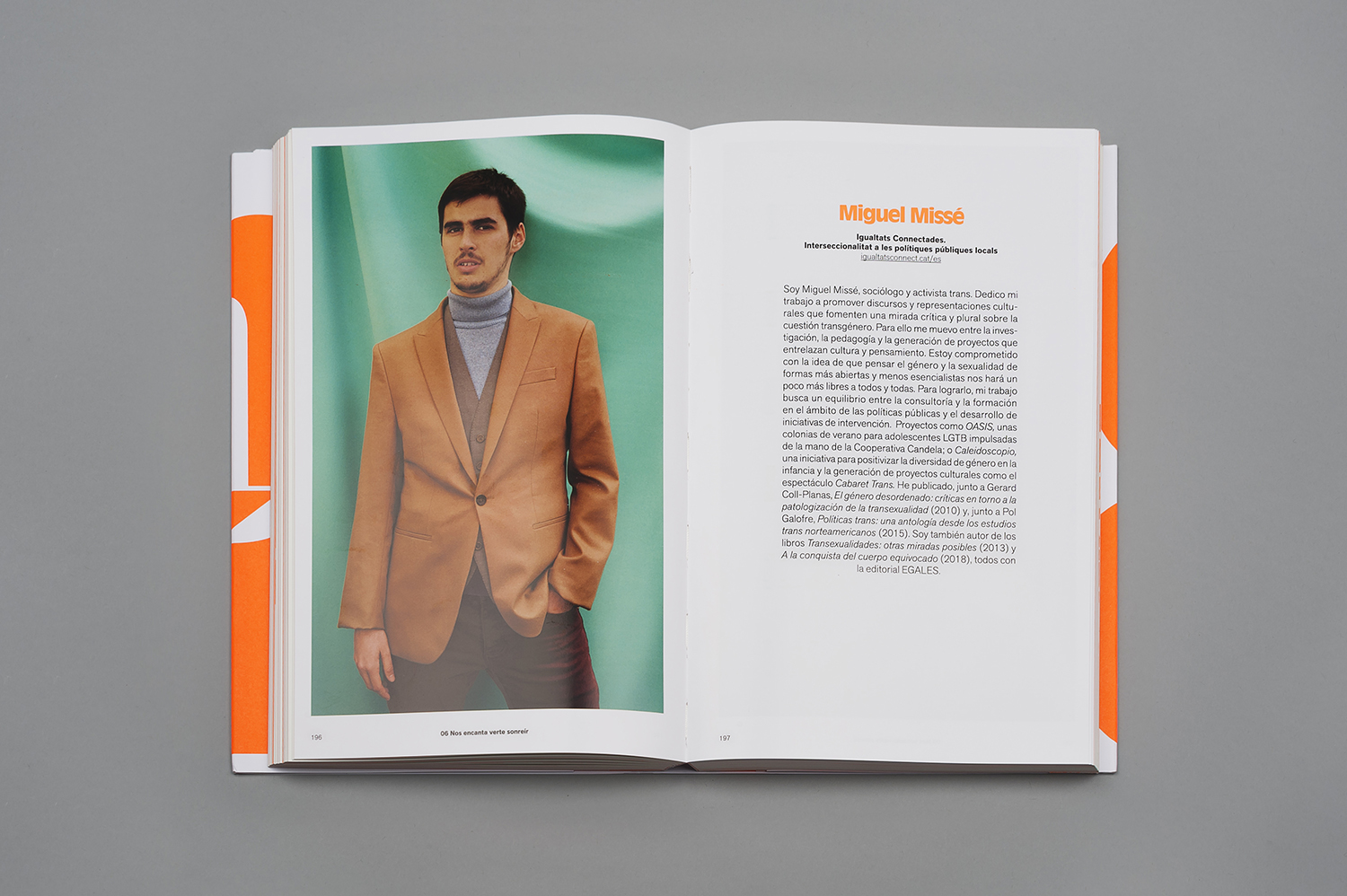 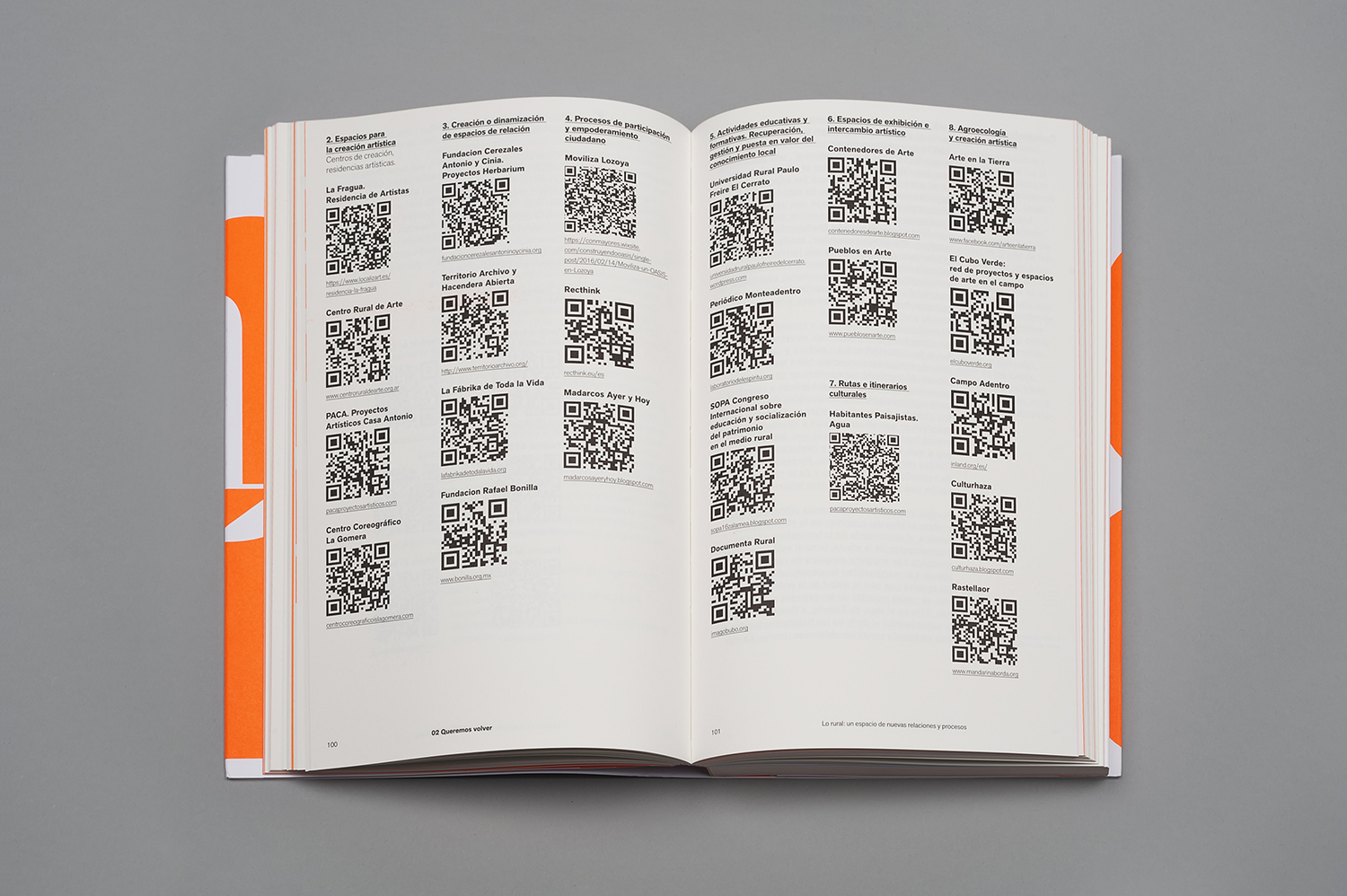 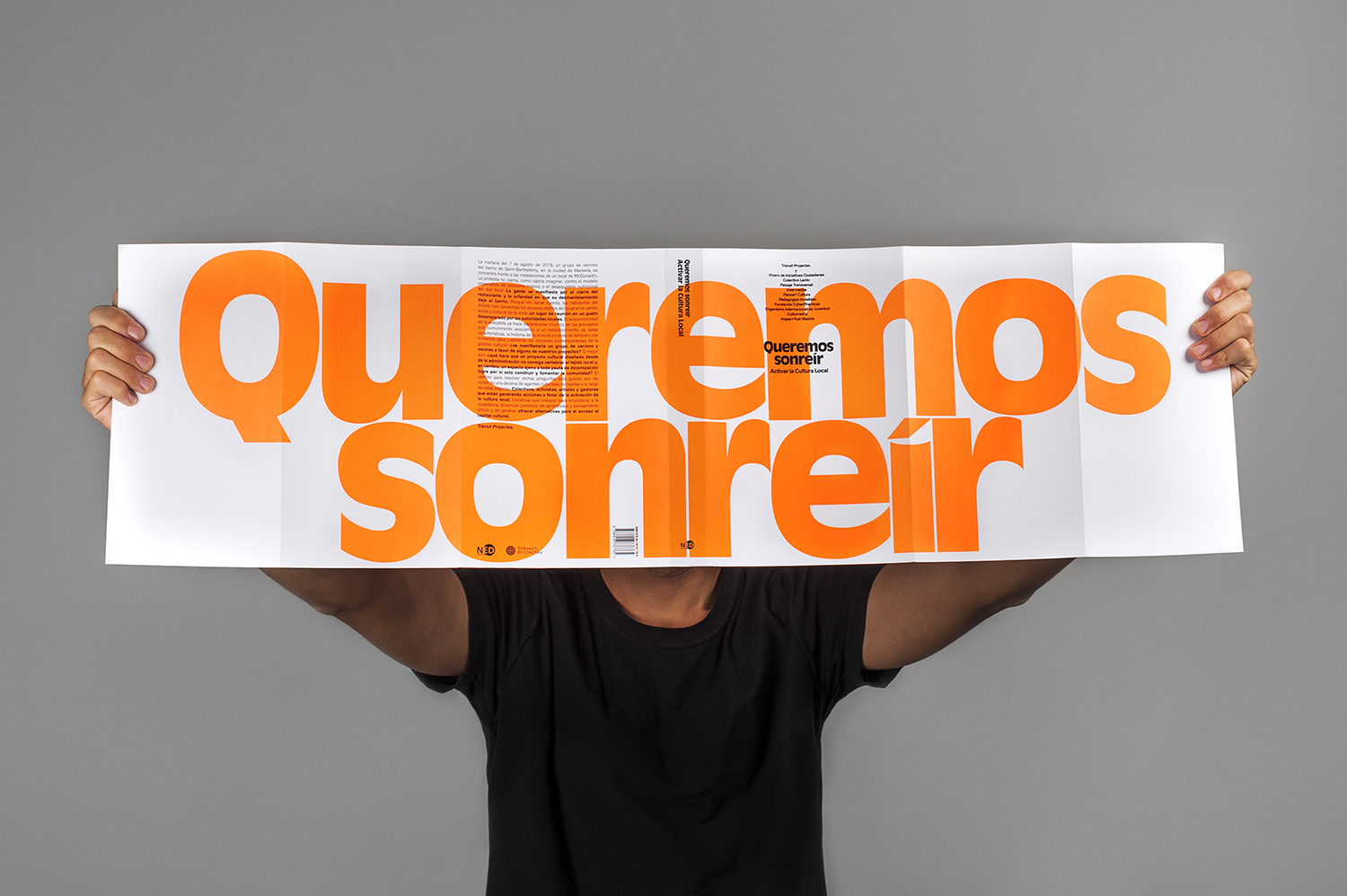 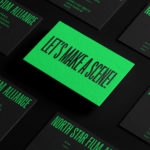 LogoArchive Issue 6
Next
Get once weekly updates