Designmuseo is a Finnish design museum, housed in a late 19th century building by architect Gustaf Nyström, and located on Helsinki’s Korkeavuorenkatu Street. The museum exhibits national and international work from the fields of fashion, industrial and graphic design, and, alongside its permanent exhibition of Finnish design from 1870 to the present, also hosts a variety of temporary exhibitions throughout the year.

With the intention of raising the museum’s profile and improving visitor experience Designmuseo worked with Bond to develop a new visual identity treatment which included exhibition design, signage, wayfinding, marketing and web design. Inspired by Finnish designer and architect Alvar Aalto, Bond’s system leverages a modular aesthetic to link bold and reductive forms with detailed typographical arrangements in a way that blurs the line between creative play and a sense of industry.

As you might expect from a logotype built from modular components, there are moments of aesthetic distinction and awkwardness in service of a broader concept and a wider set of applications. The association with and universality of pre-school building blocks and the use of lowercase letterforms make the identity feel familiar and accessible, and broken apart and oversized in print, impactful, creative in its variation, slightly industrial and well-suited to a design-led experience. Avoiding circular forms give the letter shapes a touch of character, moving them away from the multitude of similarly constructed logotypes.

The clean lines, smooth curves, geometric shapes, reduction, and consistent line weight of the letters are in opposition to the personality, heritage and ornamental exterior qualities of the building, and although in this case it would perhaps be unsuitable for the building to impose itself on identity, the disparate nature of the two does help draw attention to the passing of time and changes in values, ideal for a design museum. 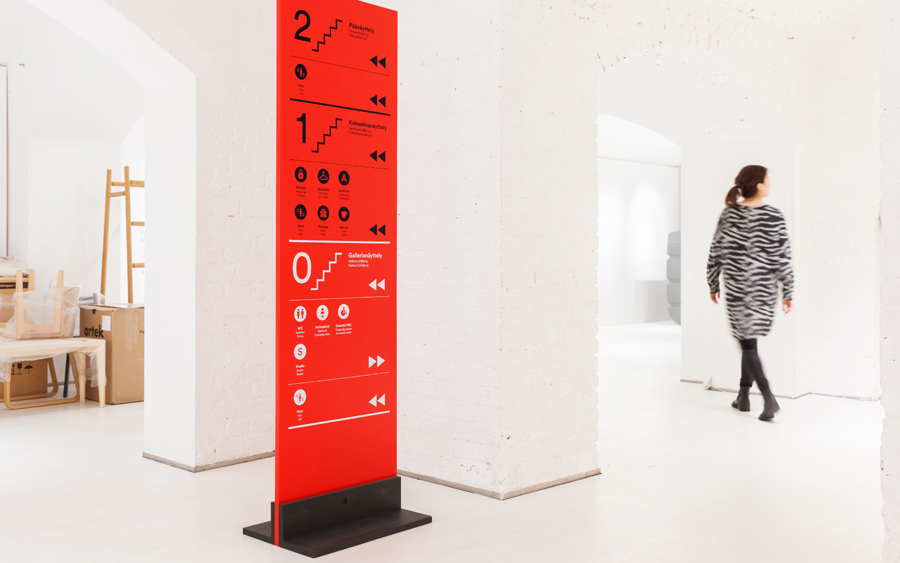 While a current favourite amongst designers, but far from saturated, Circular works well as a solid secondary typeface for both copy and headlines. Small character details alongside geometric forms place it in a similar space as the logotype, but with a legibility and cross-platform practicality.

A red highlight and moments of humour within the signage bring a little life to the restraint and modular repetition of the identity, and punctuates a clinical interior of white walls, floors and ceiling, picking out moments of information and interaction.

The robust qualities of the logotype, its constructed and deconstructed application, and a limited colour palette provide a solid anchor from which to introduce moments of play across the posters, with Swiss-style typography being given a strong aesthetic role in its criss-crossing, mixed-orientation and cropping, alongside the unique forms of product image drawn out using plenty of unprinted space. More from Bond on BP&O.

Simon Pengelly by Spin
Next
Get once weekly updates