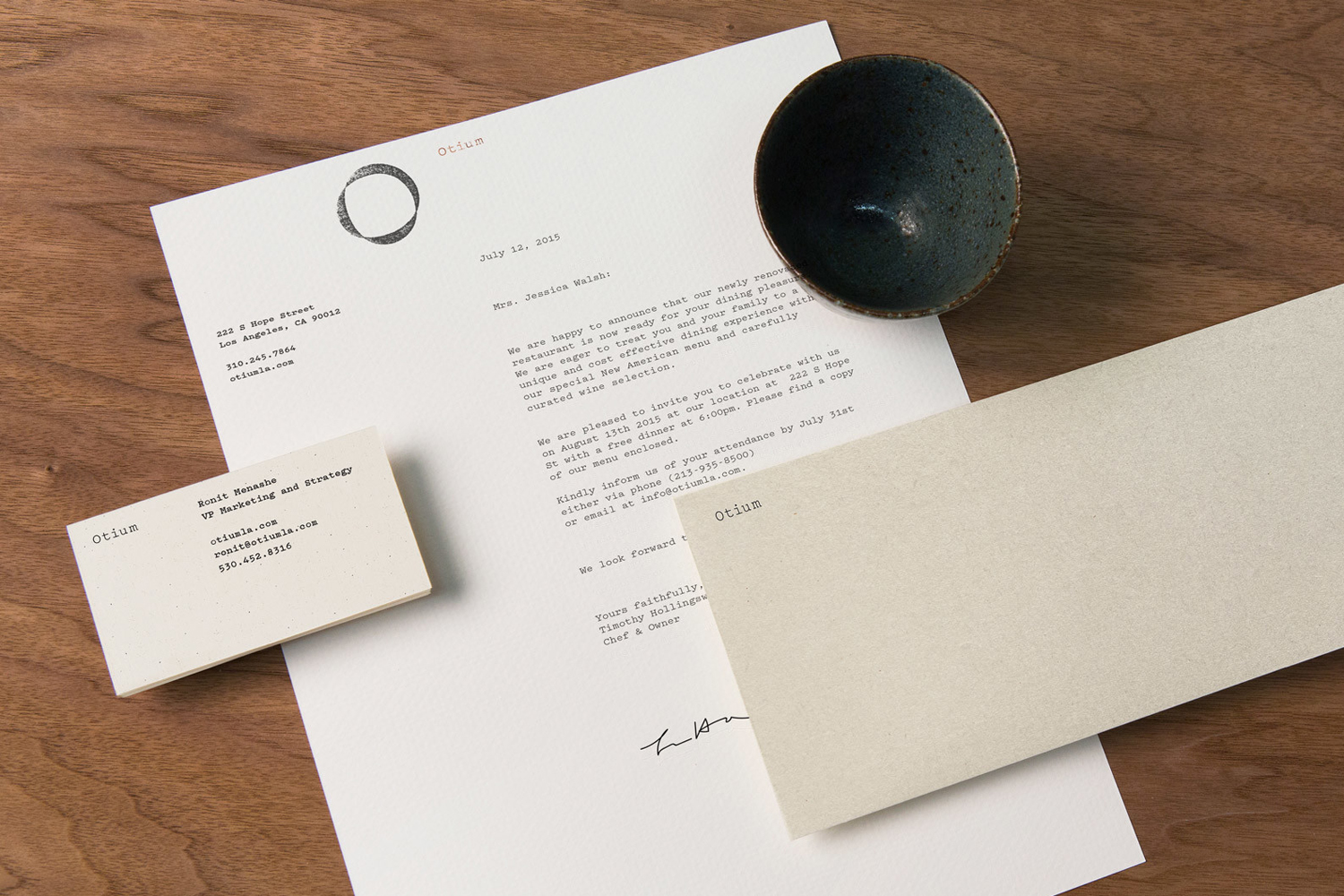 Otium is a contemporary restaurant developed by American chef and restaurateur Timothy Hollingsworth. It is located in downtown LA and has a menu of rustic dishes made from sustainable ingredients grown on its mezzanine level and cooked over a wood fire. The restaurant features an open kitchen that merges indoor and outdoor spaces, created with the communal areas of its neighbours, The Broad Museum of Contemporary Art and Grand Avenue, in mind. This is also expressed in the name, rooted in Latin, which describes a place of leisurely social activity, and throughout its brand identity, which intended to bring the outdoors in. This is achieved using a mix of materials across packaging, menus, stationery, coasters and business cards, subtly expressed by a simple logo, and more explicitly as a large and detailed mural, all created by New York based graphic design studio Sagmeister & Walsh.

It would be very easy to infer any number of different things from the simple form that defines the logo, but within the context of a modern restaurant, it is not too much of leap to call to mind holistic and environmentally conscientious culinary practices. Although not hugely original, the loop and twist is a neat expression of the inside out, outside in concept, and with a menu of ingredients sourced from the restaurant’s own garden and a sustainable menu, it feels rather fitting, and works to link, in a straightforward graphical manner, a variety of collateral.

Projected on to the exterior of the restaurant, the logos delivers contrast to the geometric shapes of structure, yet shares a similarly organic quality to the wooden panels of its build.

The real highlight of the project is the large mural across one full side of the interior. The lettering, Inside Out & Outside In, rendered as tree branches, covered in leaves and home to snakes and bugs, is lovely. Although flat panels, there is a remarkable sense of depth in its creation, print and implementation, emphasised by the use of dark background and strong lighting, and benefits from what looks like a physical rather than a digital build. Respect to the studio if they populated this with real animals.

The phrase is a more explicit expression of the logo, which is great, and does a good job of clarifying concept and making a strong connection between interior furnishing, exterior space, natural ingredients, sustainable practices, craft and print work.

Where logo is simple and graphical, brand identity, as it manifests itself in print, features an abundance of material texture. The choice of substrates, which includes a variety of tactile surfaces, uncoated and unbleached stocks and the irregular flecks of mixed-fibre boards, alongside the utility and mechanical qualities of type, works well to evoke a sense of the earthy and the built environment. It manages to find a comfortable meeting point between sophistication and hand-craft, the urban and the natural, and the wooden panels and steel structure of the restaurant. This tension continues across the menus, and interior furnishings of cut stone, carved wood, and machined light fixtures.

Other highlights include menus made up of different papers, paper sizes and the use of full bleed images of foliage, bound to what looks like reclaimed and defaced wood with rusty reclaimed bulldog clips. It takes a lot of skill and sensitivity to balance and pull off such variety.

The initial simplicity and economy of expression of the logo, type and layout in print punctuates and offers a counterpoint to the materiality of papers, rich detail of the mural and quality of interior, delivering contrast but also continuity in concept, complimenting menu and ambience. This concept successfully moves between the nuanced and the more expressive, the physical and the visual, with each asset feeling well-weighted as part of the whole, and individually interesting.

Designers’ Friend by Paul Belford Ltd
Next
Get once weekly updates