The restaurant has a menu of simple dishes made from seasonal produce using classic techniques, and influenced by the French and South Pacific heritage of David and Monica, respectively. It also features a warm interior of rich material detail and pattern, created by Softroom.

Mere’s brand identity, developed by London-based design studio Bibliothèque, brings these interior details together and draws a sense of refinement, craft and character from the intersection of materials and the use of unusual typographic form across menus, receipt holders, business cards, cloakroom tags and signage.

Highlights include the pattern work. These move between the custom made Tapa Cloth or ‘Siapo’, which sits above a banquette in the main dining room, and the precise and geometric interpretation of this across glass partitions. Where one feels distinctly traditional and hand crafted the other is modern and reductive in its use of positive and negative space, with furniture, lighting and interior arrangement feeling somewhat transitional, sitting between and connecting these two graphic elements.

Restaurant brand identities can often be divided into two groups. Those that favour contrast, introducing something new and unexpected into environment, or favouring continuity, sharing a clear and unmistakable commonality with space. Often the latter is somewhat impressionistic rather than explicit. Here, Bibliothèque build a visual identity from a very literal translation of interior, deriving distinction through the unusual intersection of its materials, and draws a parallel with culinary craft and process in its production.

Brand identity can be broken down into to two key components, the rich, tactile material qualities of menus, receipt holders and business cards, and the reductive but idiosyncratic graphic expression of type. The way these intersect as cloakroom tags and interior signage, much like the patterns of interior linking tradition, heritage and European modernity, form a neat and tangible connection between these two components.

The name Mere was inspired by Monica’s mother, and the letter M of the Mere logotype draws on an element of Monica’s Samoan family tattoo. As naming and tattoo symbolises members of Monica’s family, the logotype and supportive typeface has its own individual qualities, drawn from a bespoke cut of Clement Rouzaud’s typeface Ratio. Monolinear lines and geometric proportions effectively hold together an incongruous but interesting combination of upper and lowercase characters.

Logotype and typeface have something of a dual nature, finding a contextually appropriate balance between the familiar and the unusual, technicality and character, the very personal legacy element of the M (which goes on to inform the way material meets across menus), and a modernity and restraint that sits well within the context of rich material detail.

Business card pattern makes a literal connection with interior. This appears distinctive, and draws on and gives precision to the hand drawn intricacies and forms of Samoan art, yet, in the implementation as small flourishes within interior and the context of the business card, feels modern. It has a neat heritage reference and contemporary interpretation, that acknowledges the partnership that underpins the venture, and the need to find and articulate the resteruant’s own identity without leaning too heavily into one cultural background.

Typography, particularly online, and considering its idiosyncratic qualities, feels a touch conservative in its implementation. This is used, for the most part, at small sizes, in line with what you might expect from fine dining. There is a bit of tension between its character, which is calling out for more of a presence, and the way its is scaled down, but this makes more sense when considered within the context of menu covers with impact.

Bibliotheque worked with Parisian atelier Imprimerie du Marais on menus and receipt folders. These feature, after an extensive period of experimentation and prototyping, a combination of three inlaid materials. Drawing on interior design, these bring together a variety of materials that includes cork, marble and wood with mottled and metallic surfaces.

There is a technical and material finesse to menus and receipt holders, a lovely balance of design thinking in their articulation of cultural intersection, and an artistic culinary craft in the process of prototyping, with the restaurant’s interior channelling of the personal origins and distinctive form of the M in composition.

Menus, as an expression of identity, effectively balance concept, craft and a beautiful aesthetic visual character. They contribute to interior design in an interesting and expressive way, and go further by having a variety rather than leaning on repetition.

Thought has been given to the fine dining nature of the restaurant, and the profile of its owners. Where many restaurant’s need to externalise experience to draw in patrons, Bibliotheque’s brand identity is very much about contributing to experience and communicating something of the values that underpin its inception. As such, the creation of feature pieces feels well-intentioned and sophisticated, and the idiosyncratic qualities of type, while played down online and in print, are discernible and well-founded. More work by Bibliotheque on BP&O. 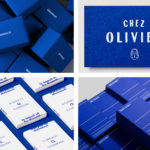 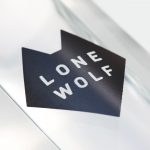